Many great coffee stouts are flavored with beans from local roasters; when it comes to fresh coffee flavor, the beans are at their peak within a day or two of roasting. When Modern Times brews Black House we’ll need 20-25 lbs of coffee beans for each 30 bbl batch. That’s too much to just show up and expect to buy on the spot, it would necessitate coordinating that enough of the variety/roast we wanted was produced a few days before we need it. Roasters also don’t usually work in beer-sanitary conditions, with a cold infusion that means added risk. While the beans are heated enough during roasting to kill any microbes on them, during cooling and packaging beer-spoilage organisms could be introduced.

Luckily for us, none of that will be an issue. A few weeks ago, Jacob invested in a small coffee roasting machine that we’ll be using at the brewery! That way we’ll be able to buy green coffee bean (which store well) in bulk, and roast on demand. It will also allow us to really figure out exactly what sort of coffee melds with the the grains of the recipe.

For a beer we were pretty happy with previously, we had a couple pretty radical alteration this time around. As the brewery will have a silo of American/Canadian pale malt, the Maris Otter used in the first two batches would mean a large outlay in both labor and cost. We'll also be fermenting our two year round hoppy beers with American ale yeast, so using an English yeast for this beer would mean having three house strains, a logistical hassle. I assumed that in such a complex beer with specialty malts and coffee, these two changes would go unnoticed, but it is surprising the impact the base malt and yeast switches had. 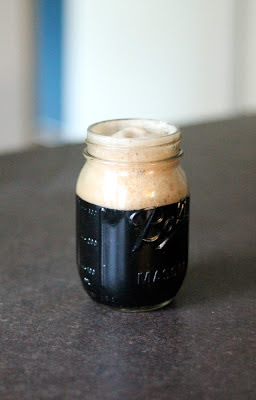 Appearance – Solidly black body at first, but by the time I near the end of the glass it appears a perfectly clear brown. The head pours thick/dense/mocha, slowly sinking to a patchy covering.

Smell – Big fresh coffee grounds in the nose. Toasted bread, slight plum/prune, with a hint of smoke. Not as complex as I’d like, the roast lacks the depth of the last iteration.

Taste – Many similarities to the nose, lots of coffee and some fruit. Moderate sweetness, but the solid bitterness from roast and hops prevents it from tasting like a Starbucks Frappa-whatever. Missing the cocoa notes that the last batch displayed.

Mouthfeel – Milkshake body, rich and coating. Moderate carbonation, could even be slightly lower. Perfect for wintertime drinking, but at 1.025 it might be too thick for a year-round beer.

Drinkability & Notes – It lost a step with the conversion from English base malt and yeast to American, but I still really enjoy it. Jacob and Alex are brewing three iterations of this beer tomorrow. One will be essentially this recipe with some Munich subbed in for a portion of the pale and C60 for the CaraMunich (to replace the Melanoidins and reduce the fruitiness), the second will play with the roasted malts (swapping the chocolate out for pale chocolate and debittered black) and adding biscuit, and the third will be a bit of a combination of the other two with a few twists. Looking forward to trying all of them!
The Mad Fermentationist (Mike) at 8:16 PM