2012 GABF – My First Trip to The Great American Beer Fest

Last week was my first trip to the Great American Beer Festival, the stupendously gigantic beer festival put on each fall in Denver by the Brewers Association. It serves as both a huge three-day four-session tasting open to the beer-drinking public, as well as one of the biggest competitions for commercial brewers (although there were about 3,000 more beers entered in this year's National Homebrew Competition!). Sadly not all of the beers entered in the GABF contest are available for sampling on the floor, but most are.

I drank some excellent beers, but the people I got to meet were the highlight. I got to chat with a good number of brewers I had only talked to on the phone, including Chad Yakobson (Crooked Stave), Jason Perkins (Allagash), Lauren Salazar (New Belgium), Patrick Rue (Bruery), and Will Meyers (Cambridge). On Saturday James Spencer of Basic Brewing Radio and I walked around the floor, drinking sour beers and recording interviews for a future episode of BBR. I also got to chat with Betsy and Brad from BYO Magazine, Stan Hieronymous, not to mention a number of homebrewers (and even a couple professionals) who were excited to talk beer with me!

I was impressed by how many breweries brought “the good stuff.” I hadn’t expected Russian River, for example, to bring sours like Toronado 25th Anniversary and Framboise for a Cure (and even the worst lines were only about five minutes). It was terrific to drink beers from breweries I was already a big fan of or from hyped breweries I'd never sampled, but it was almost as fun to try random sour beers from smaller breweries like DESTIHL, Natty Greene's, Ladyface, and The Commons. It is amazing how much the segment has grown since sour beers were given their own GABF category just 10 years ago. While there were some clunkers, overall I was impressed by the quality.

The other thing going on during GABF week was constant events with beers too rare to pour at a festival that attracts 50,000 attendees (triple counting people like me that went Thursday, Friday, and Saturday). I split a bottle of Jolly Pumpkin De Viento (a tart coffee saison with "a secret Algerian spice blend") with some friends while eating vegan "sausage" pizza and seitan buffalo wings at City O’ City (both the beer and food were surprisingly good), before chatting with brewer (and noted vegan) Ron Jeffries. Friday I braved the crowds at Falling Rock to try Cigar City’s Apple Brandy Barrel-Aged Hunahpu's (one of the darkest, most viscous, complex beers I’ve tasted… but a couple ounces was more than enough on a sunny afternoon).

A few survival tips for those thinking of going next year: 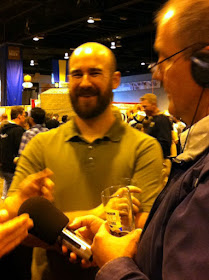 1) Eat before you go. Sessions start right before a standard mealtime, so eat something early to help you remain coherent. The only food you can bring in has to be strung around your neck (pretzels were the top pick, but I saw people with donuts as well).

2) Either show up early to get a good spot in line, or an hour after it starts to avoid walking around the convention center to the end of the line and then back to the front entrance.

3) Even though they are one ounce samples, don't be shy about dumping beers you don't enjoy.

4) Drink a lot of water. Walking, talking, and drinking for four hours in a warm room can dehydrate you pretty badly if you aren't careful.

5) Don’t go too crazy pre-fest, sure there are loads of excellent events each afternoon, but there are so many beers to try at the fest that you don’t want to be drunk or worn out before it starts.

6) Go after anything you really want to have on Thursday night. Some of the more popular or lower production stuff was already starting to kick by Friday. I was thinking that brewers were holding things back for the Members-Only Session on Saturday, but they were not.

7) Get a good night of sleep, if you can taste anything or need another beer after four hours of that sort of choice, you aren't doing it right.

8) Stay within walking distance, my hotel was about a mile north of the convention center so I avoided having to fight for a cab after the fest each night. I was also close to Masterpiece Deli, terrific sandwiches (nothing helps you recover from a night of drinking, and vegan food, like braised brisket).

9) Skip the Saturday night session, when I asked one brewer if he was looking forward to it, all he said was "shit show." Honestly I might skip Friday night next time I go as well. It was pretty densely packed compared to either Thursday night or Saturday afternoon.

My Top 15 Beers from the fest (in no particular order):