If someone tells you that they never brew a bad batch of beer, odds are that they don’t try many interesting techniques either. The coffee oatmeal stout I brewed a few weeks ago with a half-pound of oats added to the boil, would have been better if I just added them to the mash instead. The beer is still very good, but the oats didn’t add that rich silky body that I was hoping for.

Coffee "Oats In the Boil" Stout 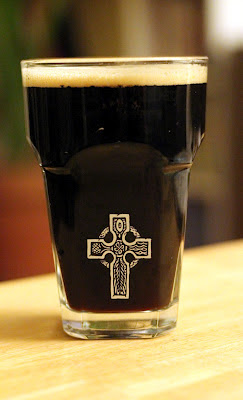 Appearance – Almost black, but not quite. The oats in the boil didn’t have a negative impact of the appearance of such a dark beer, but looking at the edges it is certainly hazy (although not murky). The tan head is sticky, but not especially long-lasting.

Smell – A few people who have tried this beer have described the aroma as pre-packaged coffee/mocha drink (e.g., Frappuccino), and that isn’t a bad description. It has a sweetness, and light chocolate/coffee character that screams comfort more than complexity. It is amazing how nicely just two ounces of coffee beans steeped for less than 36 hours comes through. Some fresh-grainy notes from the oats come through as it warms.

Taste – The flavor is similar to the aroma, mostly smooth coffee and chocolate roast. There is a good balance of sweetness from the caramel malts and bitterness from the hops. The oats are there only as a tertiary flavor, so I am planning to up the amount and substitute in toasted oats in the second iteration for more complexity.

Mouthfeel – The mouthfeel is strange. It starts with a nice round/fullness, but it finishes thin. Whether it was the oats, or the roasted malt, something has contributed a lingering tannic quality to the mouthfeel; after swallowing each sip my tongue is left with a dry/rough texture.

Drinkability & Notes – The flavor and aroma of this beer is not far from where I want them, but I don’t think the oats added to the boil is an experiment that I’ll repeat. To channel Thomas Edison: I did not fail, I found a way to not brew an oatmeal stout.
The Mad Fermentationist (Mike) at 9:04 PM