I've been falling behind on posting beer tastings. With all my batch splitting and blending over the last year I've generated a backlog of 18 different beers in bottles and kegs that I have yet to post a tastings for... as a result this week I'm hoping to knock out one a night. 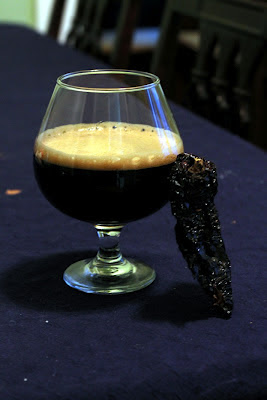 To start, I’ll take advantage of one of the last cool nights of the year to taste the “Mexican Hot Chocolate” version of my Kate the Great clone. If you’ve never smelled an ancho pepper, it smells like lightly spiced raisins. Dried peppers make so much more sense to me in a big dark beer than the grassy flavor of fresh chilies.When you spice a beer try to think like a chef, try to match them to the other flavors of the beer.

Appearance – In a bulbous snifter the beer looks pitch black. The thin light brown head has great retention and lacing, I’m sure at least partly thanks to the extra protein contributed by the wheat malt.

Smell – The dried peppers lead the aroma, complex sweet smelling spice. There is a bit of toasted malt and some chocolate as well. Otherwise it is a clean aroma that doesn’t hint at the strength of the beer. When this beer was first in the bottle the peppers provided a big cherry aroma, luckily that has since died off.

Taste – Where the “plain” Kate the Great lacked complexity, this beer has layers of toasty, roasty, chocolaty, malt with just a hint of capsicum heat in the finish. The cinnamon and vanilla play supporting roles, adding to the sweetness without being readily apparent on the first few sips. It does still lack the sharper char that most Russian Imperials feature, but with the added flavors I don’t really miss it. Relatively dry for the style, but not overly.

Mouthfeel – Moderate-thin body for such a big beer. The carbonation is medium, which is marginally more than I prefer in a big dark beer. This is the one aspect of this beer that could use some work. The 149 F conversion rest is a few degrees lower than I would mash next time.

Drinkability & Notes – Hard to complain about this beer, loads of complexity without any one of the flavors walking over the rest. I would take the cocoa and vanilla just slightly higher next time, but otherwise I think the amounts are spot on. I like it a bit more than the similar Breakfast Stout variant I brewed, although I enjoyed the base beer of that one more than the base of this recipe.
The Mad Fermentationist (Mike) at 8:23 PM