My friend Jaime and a couple of his friends are planning to fill a wine barrel with lambic this coming weekend. He was looking to get some additional microbes to add complexity to the Wyeast Lambic Blend he is pitching, so I offered to pull a quart of microbe-rich slurry from one of our barrels for him. To help him decide which one, I pulled samples of the beers in the red wine barrel and the apple brandy barrel and opened bottles from the first pull of each. 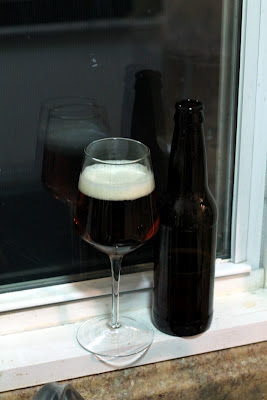 Jamie and his friend John both leaned towards the slightly sharper, funkier flavor of the apple brandy barrel (ECY Bugfarm IV) over the softer, fruitier flavor of the wine barrel (ECY Bugfarm III). So I used my auto-siphon, which just barely reaches the bottom of the barrel, to suck out some of the accumulated sediment. I removed the small cap from the end that reduces the amount of sediment transferred, and slowly dragged the tip around the interior. As an added benefit, occasionally removing trub should help stave off autolysis flavors from developing as dead yeast cells continue to pile up with each pull.

With the moderately thick slurry safely in a mason jar, I topped-off both barrels with three gallons of the amber base beer that we had left over from the first refill. Since the first pull from the apple brandy barrel is pushing the upper limit of my tolerance for acetic acid, we are hoping to minimize the keep the head space to limit further Acetobacter activity.

Here are my tasting notes from the first pull, without the addition of Amarillo, acorn squash, or blackberries:

Appearance – We were aiming for golden, but the color ended up a brilliantly clear burnt-orange. The uneven white head exhibits pretty good retention.

Smell – Big complex fruity aroma, with a bit of Brett funk. Fresh vanilla-laden American oak, despite the fact that the barrel is probably pushing 15-years-old. The aroma is slightly sharp, with a suggestion of cider vinegar.

Taste – Bright acidity, mostly tangy lactic, but there is also a touch of acetic that hits me on the back of the throat. The finish is deceptively sweet, with more of that sugary oak char and some caramel from the malt. It is acid/malt/barrel forward with funky Brett supporting, a balance that shares many commonalities with the best Flemish reds.

Mouthfeel – Average body and mouthfeel, surprisingly full despite the 1.004 FG. The body is thanks to the saison yeast primary fermentation, which added extra unfermentable-body-enhancing glycerol. Solid carbonation, about right for a strong-ish sour beer.

Drinkability & Notes – Every time I open a bottle of this batch I like it a little bit more than the previous one. It has a similar balance to something like La Folie or Rodenbach Grand Cru, with a sharp sourness, but some sweetness as well. Hopefully our efforts to minimize the head space ensure the next pull does not have a sharper acidity.
The Mad Fermentationist (Mike) at 5:49 PM