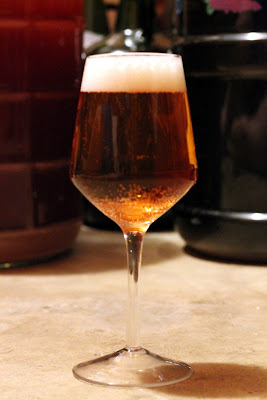 This elderflower infused sour ale is last of the four beers that Nathan and I made from the first pull from our solera wine barrel. This version was inspired by the aggressively flavored Cantillon Mamouche lambic. We recently did a tasting of this beer, and the two of the other versions, with James and the rest of the crew on Basic Brewing Radio.

Appearance – Looks similar to the other versions of this beer (other than the one on Cabernet grapes) brilliantly clear golden-yellow with a quickly receding white head.

Smell – The elderflowers add a soft fruity/floral character that blends nicely with the wine barrel. It is amazing how dissimilar the aroma is from the unexpected green pepper character I smelled in Cantillon Mamouche. Not sure if that is a result of the amount of flowers added or that we used dried and they used fresh. There is still some fruity-funk from the bugs as well.

Taste – The acidity comes across as almost citrusy. It is very front of the tongue, bright, crisp, and sharp. Reminiscent of lemonade, minus the sugar. The fruitiness is really nice from the barrel, Bugfarm, and flowers. The finish lingers with the floral character featuring more prominently.

Mouthfeel – Firm carbonation, although well short of being spritzy. The body feels surprisingly full for a dry/sour beer.

Drinkability & Notes – Very enjoyable, although I could stand a slightly more aggressive elderflower flavor than the one ounce for three weeks delivered. The flowers do obscure some of the more complex fermentation flavors of the plain version, but their flavor makes up for it. Interestingly, the floral character seems to have built as the beer as aged in the bottle, with some of the “young” flavors cleaning up over the last few months.
The Mad Fermentationist (Mike) at 8:39 PM