Barrel aging is a lot of fun, and really isn’t that much more challenging than using a carboy or bucket (if you have the space for it). After three beers each aged for a year each in our first barrel, which previously held bourbon at A. Smith Bowman, the oak and spirit characters it once imparted are now almost completely depleted. It could certainly continue to age beers that benefit from a lighter touch of oak, but we thought it would be more fun to start over with a fresh barrel from the same distillery (originally we were hoping to score a port barrel from a local vineyard, but their timing didn’t match with ours). 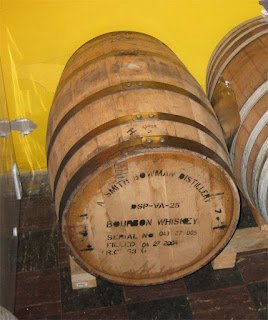 I’ve received a couple emails recently requesting a detailed explanation of the process that we go through when preparing a new barrel. So here is is:

1. Remove the wooden bung
2. Rack beer into the barrel
3. Affix a new bung that allows carbon dioxide to escape

We do not rinse, burn a sulfur wick, or otherwise clean or sanitize the barrel before filling. The most important thing to do is have the beer ready to go into the barrel as quickly as possible after the barrel is emptied. If you obtain a barrel which previously held wine or beer and are not able to fill it within a couple days, then it would be a good idea to rinse the barrel. If you need to hold the barrel for longer than a couple weeks, then you should consider either burning a sulfur wick or filling with a holding solution composed of water, citric acid, and metabisulfite. Your goal is to prevent the growth of microbes like Acetobacter and mold which can cause off-flavors. Spirit barrels are safer for longer (which is good since burning a sulfur wick in one can have explosive consequences), but they too will eventually dry out which can cause them to leak when finally filled. 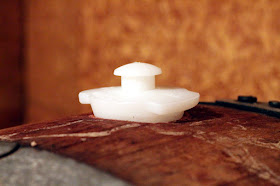 For the closure, previously we have used standard #10½ rubber bungs affixed with water-filled airlocks. However, after recently talking to Vinnie of Russian River, I picked up a couple of these that convert between waterless airlocks to solid silicone bungs. It will be nice not to worry about a dry airlock allowing a free flow of oxygen into the beer (virtually guaranteeing acetic acid production).

Since we were starting over with a clean barrel, we thought it was a good opportunity to also pitch a new culture. The previous barrel had a resident culture that produced a wonderful, mostly lactic, sourness and did not completely dry out the base beer. The character shares a lot of similarities with beers from Raccoon Lodge, where they pitch their sour beers with a house strain of Lactobacillus in the absence of Brett. Nathan is planning to use our retired barrel to help start his barrel program at the brewpub where he'll be brewing, Right Proper.

Most of the oud bruin we transferred out of the old barrel went into bottles, but as usual some people put part of their shares onto fruit. I moved one of my two shares (4.5 gallons) onto 2 lbs of sour cherries, Nathan went with raspberries, and Alex is considering peaches or pumpkin. One of the most enjoyable parts of these barrel days is getting to try variations on the beers that other people have done previously. This time Jeff brought both cherry and raspberry versions of the wine barrel aged Belgian single, both of which were very nice. 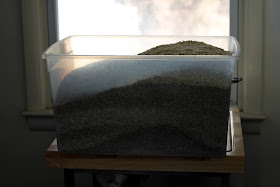 For the new barrel we wanted to pair the vanilla and coconut aromatics we got in the first beer aged in the original barrel with the cherry-pie aromatics of the Brett lambicus strain from Wyeast (the White Labs version of the strain is much funkier, and would not meld as well). To support the bold character of the fresh barrel the six of us agreed on an oatmeal barley wine recipe that included a hefty dose of crystal malt. Since we are not pitching lactic acid bacteria, we were able to add more hop bitterness than we would want in a truly sour beer. For subsequent fills we may pitch additional microbes transitioning to sour beers, but it will be another year before we have to make that decision. 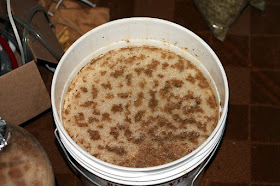 Collected 9 gallons at 1.102 with a batch sparge. Collected 3 extra gallons of final runnings and boiled those separately for 20 minutes.

Chilled to 70 F, shook to aerate, and pitched a blend of rehydrated US-05, S-23, and a passed its best by White Labs Southern German Lager.

Left at 63 F, good fermentation by 24 hours. At that point I moved it to the basement to restrain the lager yeast from getting too fruity.

3/25/12 Racked into new bourbon barrel. Alex made 5 gallons with Wyeast Brett lambicus (WY5526) that will serve to get the rest of the batch going. The barrel was about 3 gallons short of being full.

Eventually dumped as a result of timing issues...
The Mad Fermentationist (Mike) at 5:56 PM