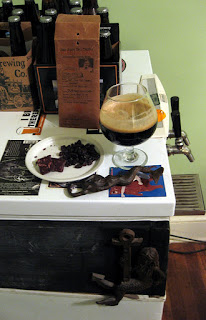 Imperial Stout is one of the handful of styles that I love, but just can't seem to nail. I've made several ~B+ versions based on well regarded recipes, but none that stack up with the best commercial (or homebrew) examples. As a result, a few months ago I took a crack at the recipe for Kate the Great (one of my favorite commercial versions) that Todd Mott of Portsmouth Brewing gave out. This batch is pretty young, but I'd gotten several emails asking me how it was coming along...

Smell – The nose is very closed (even after it warms), not nearly enough coffee/chocolate/roast for an RIS. There is some toastiness, a bit of dark fruit (port and raisin), but not much else. Hint of alcohol in the nose as it warms up to my (cool) room temperature.

Taste – Smooth flavor, with loads of port soaked dark fruit. Again just not enough of the roast or complexity I want. Some bitterness to counter the slightly sweet finish, giving it a balance reminiscent of good dark chocolate.

Mouthfeel – A bit over-carbonated at the pour, but a few swirls and it is down to the low level I like in my big dark beers. Great creamy body with a thick almost milkshake consistency.

Drinkability & Notes – Not unpleasant at all, and as an Imperial Porter it isn't bad, but the reliance primarily on Carafa Special III for color (not to mention only 6.5% dark grains) leaves it lacking the firm roast of a stout. I'm not sure exactly what the difference is in the results Portsmouth gets from this recipe, maybe a finer grind? Water chemistry? Scaling issues? Maybe just the slightly lower original gravity?

I am hoping a few months of cold conditioning in the fridge will help to clarify the flavors and bring out the roast. I'll be revisiting this one in a few months, I find it often takes a year for RIS to get to where I am happiest with them. As it stands, if I brewed this again I would probably go with at least 50% more of the dark grains (other than the Carafa) to get the flavor I am looking for.
The Mad Fermentationist (Mike) at 7:16 PM