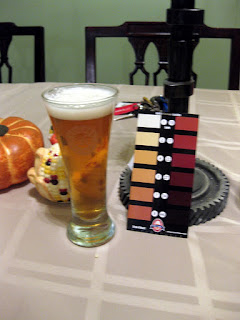 With two kegs waiting for an opening in the kegerator I’m happy to have my whole family in town for Thanksgiving (my first time running the show). While I’ve been loving the Riwaka Hefe Weizen the Galaxy DIPA has been drinking a bit slower. The flavor is great, but there is only so much 8.8% ABV beer I want to drink. Especially the presence of my father, who managed to kill a case of my first double IPA that I left at home when I moved down to DC,  for the week is much appreciated!

In doing some research trying to figure out who was the first American craft brewer to release a sour beer (Cottonwood in 1995 is the current leader), I stumbled upon this quote on Beer Connoisseur: "In Booth II-14, Vinnie Cilurzo served the first commercial “Double IPA” anybody ever heard of. He brewed the beer in June of 1994, his first batch at Blind Pig Brewing in Temecula, Calif. He aged it on oak for nine months and served it on the brewery’s first anniversary as “Inaugural Ale.” It was 15 months old when he hauled it to GABF." Funny that 16 years later at Russian River he is now plastering "Drink fresh, do not age!" on every bottle of Pliny the Elder... not that I'm complaining!

Appearance – Darker yellow, with warm burnt orange tones. There is still a slight haze (it was cloudy when young), not shocking for a dry hopped beer. Fine white head starts dense, but dissipates over a couple minutes despite the hop resins.

Smell – Ample “America” hop aroma, some tropical and citrus, but also pine. The hop character is more complex than I usually expect from a single varietal, but it isn't quite as assertive as I would like. There is some clean sweet ethanol as well, not obnoxious, but on the high side for the style.

Taste – Firm bitterness, clean, slightly rough. Saturated with big green and fruity hops, lingering into the finish. The malt character is almost completely covered up, but what is there is clean and crisp. I recently had my first taste of Alchemist Heady Topper, and enjoyed the slightly bready (without caramel) malt character.

Mouthfeel – Light body with moderate carbonation. This is what I like in a strong hoppy beer, a thick body would have made this too close to an American barleywine.

Drinkability & Notes – I am a fan of this beer, but if I brewed it again I would back down the alcohol. For a big DIPA this is a very drinkable beer, but at close to 9% I am taking my time. Seems Galaxy is great for anything that you might use Simcoe for, terrific hop!
The Mad Fermentationist (Mike) at 9:25 AM