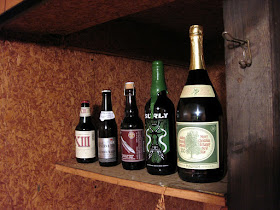 Can craft brewers please stop with the bombers and 750s of strong beers? Why is it that the same brewery will put their pale ale in 12 oz bottles while their barleywine goes into bombers? Why would I want a beer with a higher alcohol content to come in a larger serving size? When I’m bottling I use the big bottles for session beers, while I save my 12 oz bottles for strong beers with just a handful of bigger bottles for sharing. I know that some people like bigger bottles for homebrewing because it means fewer bottles to clean, sanitize, fill, and cap. If breweries passed on the savings they got from using fewer bottles/labels/caps etc… I would have less of a complaint.

Even the six-pack is no longer safe, with breweries like Founder’s moving many of their beers to four-packs. Again despite the smaller amount of beer the price seems to have stayed about the same or even gone up from what the six-packs used to sell for.

What does it come down to? Marketing pure and simple. People are willing to pay more for a beer they perceive as special, big bottles call out to us, corked and caged bottles doubly so. Nice labels, waxed tops, bags, boxes, metal tubes, tissue paper, hand signed, you name it a craft brewer has tried it. As craft beer consumers we need to stop rewarding breweries that try to dupe us with this added packaging that boosts the price, but doesn’t make the beer taste any better.

It seems like more and more beers are only being released in larger bottles, especially limited release and collaboration beers. When I am buying a beer I haven’t had before, or one that sounds weird/experimental I’d rather buy as little of it as possible (which is why it is great that some beer bars sell sampler sizes). I’d love to see more breweries putting their weird beer into smaller bottles (7 oz nips would be perfect), but I’d be thrilled just to see more 12 oz bottles.
The Mad Fermentationist (Mike) at 10:41 PM