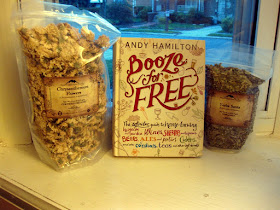 A few months ago the publisher of Booze for Free: The Definitive Guide to Making Beer, Wines, Cocktail Bases, Ciders, and Other Drinks at Home emailed me to ask if I’d be interested in a free copy of the book, I couldn’t turn down the irony. Andy Hamilton's focus in this book is on making beer, country wines, infusions, and other alcoholic beverages with ingredients that can be foraged. Despite the title, most of the recipes call for buying malt, sugar, yeast, etc… although there are a couple truly free recipes (like one based on corn stalks).

I found the book to be a bit of a mish-mash as it tries to cover a wide range of topics without doing any of them justice. It starts out with a brief overview of the brewing process and equipment. These sections are pretty basic, and would probably not be enough to adequately guide someone who had never brewed before. For example I didn’t see any discussion about fermentation temperatures, pitching rate, aeration etc… There is a brief mention of starters... made with refined sugar right before pitching.  I’d rather see this section skipped than done so poorly (especially as the author points out in the intro, how frequently peoples’ first attempt at fermentation go awry).

The remainder of the book is divided into four sections, each with recipes based on what is available during a season. This is a really cool way to organize a book, and it lends itself to flipping through the pages for inspiration. Each two to three page section is centered on an ingredient with information on where to find it, a bit of history/lore, and usually a couple recipes. Luckily the book mainly stays clear of the medicinal claims that turned me off of Sacred and Herbal Healing Beers.

Foraging is something that I’m interested in trying, but the instructions/descriptions aren't detailed enough to make me confident about eating something I find in the woods. In many cases the descriptions are on the vague side and lacking a way to positively identify a plant you’ve encountered. For example on the section on yarrow he mentions it is easy to confuse with hemlock, but doesn't provide any positive identifiers for picking it out.  I also can’t tell how many of the plants are available in my area (the author is English). To have a great book on foraging you’d need maps, detailed descriptions, pictures etc… The same goes for the gardening suggestions, they would only be adequate if you were already knew how to garden. Luckily many of these items are available for purchase, but that defeats much of the point of the book.

Most of the recipes seem to rely too heavily on sugar for me, which is one of the same problem I had with Sacred and Herbal Healing Beers. It doesn’t help readability that the batch sizes vary wildly, swinging from a couple pints to 50 gallons. Standardizing recipes makes them easier to quickly compare and adjust. Maybe some of my issues are in the terminology differences between English and American homebrewers. For example in his Nettle Ale #2 recipe (which incidentally calls for no malt whatsoever) he suggests that the person who gave him the recipe uses brewer’s yeast, but that he has had better luck with ale yeast… what does that mean? In that recipe he also suggests pitching the yeast when the wort has cooled to “blood temperature” and adding ½ lb of sugar to the keg for conditioning, what terrible advice!

There are some interesting tidbits to be found for sure, but when I don't like an author's basic brewing instructions I have a hard time taking their advice on other topics.
The Mad Fermentationist (Mike) at 6:55 PM