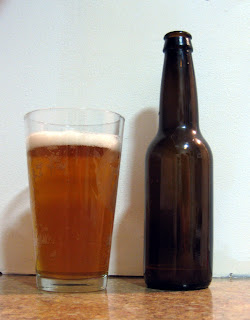 Audrey and I brewed a Gose when she came down to DC over Columbus Day last fall, and we bottled it when she was here over her Christmas break.  I tend to make a lot of aggressively sour beers, so it was a nice break to brew something with a bit more restraint (and a quicker turn around).  Sadly I violated my own rule and added 10 IBUs of hops; even with a head start the Lactobacillus didn't produce much sourness (too many IBUs and Lacto can't do its job).

The result is actually pretty close to the only German version I've tried, but it isn't as sour as the Summer Gose that caught our attention at Raccoon Lodge while we were out in Portland last summer.

Appearance – Nearly clear, honeyed-yellow with just a bit of haze. The simple white head initially pours one inch thick, but quickly falls to a ¼ inch.

Smell – Fruity coriander in the nose with some fresh yeasty bread. It doesn't smell sour per se, but it does have that faintly-off Lacto nose (not sure how else to describe it any better).  I think it may just need another month or two to smooth out, the bottles still have tiny oily pellicles.

Taste – Fresh, clean flavor with wheaty malt and some coriander. The spice is at the right level for me, present, but not enough to obscure the other flavors. The sourness isn't as forceful as we wanted, but it has a slight tartness. The finish is ever so slightly briney, pretty close to what I experience from the Bahnhof version (the sourness is comparable as well).

Mouthfeel – Solid medium body with bubbly carbonation. The CO2 is about halfway between a regular American ale and a German wheat beer.

Drinkability & Notes – Turned out well even though it isn't exactly what we were aiming for. I'm still hoping the sourness might increase a bit as it sits warm in the bottle, but after more than four months since brewing it seems unlikely.  This is a sour that would sell very well in the summertime.  If you want to taste the salt I would probably double the addition.
The Mad Fermentationist (Mike) at 8:07 PM