Low-carbonated, naturally-conditioned "real" ales served from a cask are now strongly associated with English ales (thanks to CAMRA), but up until the invention of kegs and pressurized CO2 cylinders this is how beer all over the world was served on draft.  As much as I enjoy having a pint of bitter or a mild on cask, I wish more breweries/bars would serve other styles this way.  The soft carbonation and warmer serving temperature really helps to enhance the body and character of most low gravity beers.

Many people associate casks with hand pumps that use air pressure to draw the beer up from the cellar and into the glass.  The simpler way to serve cask beer is with a spigot at the bottom of the cask, allowing gravity to dispense the beer.  I took a keg and shortened the dip tube to serve my American Bitter; it isn't quite as pretty as a pin or firkin, but it  gets the job done.

After the yeast produced enough carbon dioxide to carbonate the beer I added the cask hops and let it sit for a few weeks at wintertime basement temperatures.  A few days before I wanted to start drinking it I moved it upstairs and onto its side to give the yeast time to settle to the bottom (side) of the keg.  If I wanted to ensure a clear beer I would have added a fining such as gelatin or isinglass, but I don't mind a slight haze in a dry hopped ale.

To prevent oxidation I'm still pouring samples without venting the head space, I'll do that for a party where hopefully there are enough thirsty friends to go through the rest of the keg.  At that point I'll also place some ice packs on the keg to drop the temperature a few degrees lower than the ~63 F that I keep my house at. 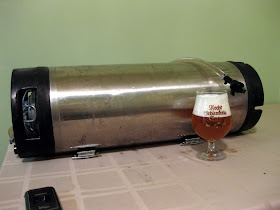 Appearance – Slightly hazy gold body with a thick clinging head. The lacing is terrifically coating. One of the prettier beers I've brewed.

Smell – The hops are citrusy (orange, grapefruit), resiny, and floral. Hint of toasty grain, accentuated by the warm/cask serving.

Taste – I get more tropical fruitiness from the hops on the palate than in the nose. Clean firm bitterness on the back end that lingers into the finish. Not much sweetness, but the bitterness isn't unbalanced.

Mouthfeel – Low carbonation with a slightly thin body, but it has a creaminess to it. The carbonation is just about right for a cask.

Drinkability & Notes – Really easy to drink, the carbonation is perfect allowing the hop flavor to linger on the tongue. A light west coast IPA.  I'm really happy with how this turned out, big hop aromatics without unnecessary booze. I'll have to find more excuses to do low gravity cask conditioned beers.
The Mad Fermentationist (Mike) at 10:37 PM