With a sizable backlog of cellared beers to sample, I thought I'd knock another one off the list by revisiting my Rauch Doppelsticke (literally Smoked Double Secret).  If you'd remember back to the summer of 2009, this beer was originally slated to be the second beer into our bourbon barrel, but after the Wee Heavy started to sour I just bottled it straight.  In a week we are going to bottle the second beer from that barrel (a porterish stout) so it seemed like another good time to revisit this one. 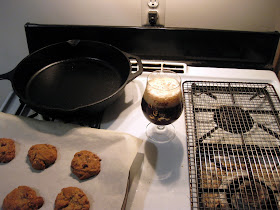 Appearance – Nearly opaque dark brown, but it has a luminous ruby glow when held to the light. Pours with two-finger-creamy-tan head that sinks slowly over a few minutes trailing a spotty lacing.

Taste – Woodsy smoked malt start, but not to the level of being bacony or meaty. There is some dark fruit (raisin) complementing the bready malt. Just a hint of alcohol in the finish along with a touch of full city roast coffee. Slight lingering bitterness balances the moderate malt sweetness. Still tastes pretty fresh, no oxidation character (unless that's what the raisin is...).

Mouthfeel – Medium body, not too full/thick like many big German beers (thanks to close to 80% apparent attenuation). The carbonation is medium-low, just about right for a complex ale like this.

Drinkability & Notes – A complex yet drinkable beer as is, but it would have been great with a bit of oak/vanilla from a few months in a bourbon barrel. I love the flavor possibilities of big lagers, but they are often so sweet that the balance and drinkability of their smaller siblings is completely lost.
The Mad Fermentationist (Mike) at 6:30 PM