One of the most important factors in making good sour/funky beers is using the right bugs (they are the ones doing the hard work after all).  I've slowly been trying to figure out which microbes impart characters I enjoy the most. The session Belgian pale that I brewed with my friend Pete last summer was my first beer with White Lab's Brett bruxellensis (a sister to the strain used in Orval).  It is supposed to impart a complex "classic" funk (the sort of leathery-horse-blanket-funk people imagine when they think of Brett), but I assumed it would be restrained (mellow even) in a low gravity (1.042) beer mashed at 147 (for high fermentability), boy was I wrong. 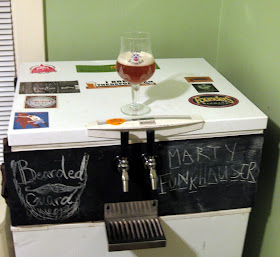 Appearance – Pours from the tap with an attractive golden hue. Slightly hazy, but much clearer than it was when it was tapped. The head pours short, but it sticks around and clings nicely to the sides of the glass.

Taste – Complex funk, farmyard, hay, hints of fruit, minerals, slight urinal. Toasty/yeasty finish (the Vienna malt comes through nicely). The finish is pretty dry, but it isn't grating. Slight hop bitterness, but not much other Saaz hop character left (I was originally planning on drinking it fresher, but I kept waiting for the funk to get to a happier place).

Mouthfeel – Light body but it avoids being watery or tannic. Moderate carbonation.  About right for a borderline table strength beer.

Drinkability & Notes – Should have been a refreshing beer, but the aggressive funk gets in the way. Seems like a solid recipe, I think the issue may just be the strain of Brett Brux. I've used it on a few other beers and don't really love any of them. I might have to dump my culture and give the Wyeast version a shot in a few beers.
The Mad Fermentationist (Mike) at 8:59 PM