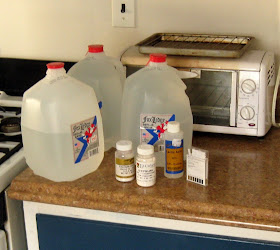 I've written in the past about batches of beer that failed to turn out well due to poor recipe design, and microbial invaders, but those aren't the only ways to screw up a batch...

For a few months I'd been thinking about brewing a traditional Czech/Bohemian Pilsner.  I ordered Saaz hops and Weyermann Bohemian Pilsner malt (although I didn't get my hands on their traditionally floor malted stuff) the only two ingredients needed for the clean/pale/spicy beer style.  I spent considerable effort researching/calculating water adjustments (to soften my water I cut it with distilled) and a decoction mash schedule (I attempted the Hochkurz Double Decoction).

Five days in advance I made a big yeast starter with a smack pack from Wyeast, it took three days to get going and when it did it looked/smelled a bit off.  No problem, I ran out to the homebrew store the day before I wanted to brew to pick up two fresh vials of lager yeast from White Labs.  I made a new starter, but 24 hours later it wasn't showing much activity when I pitched it into the 50 degree wort; at that point I wasn't too worried.  Two days later with no drop in gravity or pH I decided to cut my losses and pitched a packet of clean ale yeast. 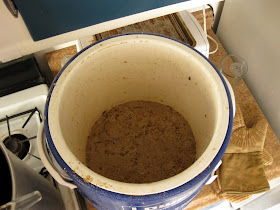 I'm still expecting this to be a drinkable beer, but it won't be quite as clean/crisp as I was anticipating.  Lesson learned, I'll keep a dry yeast on hand that can sub in for whatever I'm brewing (American, English, Belgian, Wheat, Lager etc...).

12/5/10 Heated up 2.5 gallons of distilled with 2 gallons filtered DC tap. Added 1 g each CaCl and CaSO4 to the strike and sparge water.

Weyermann Bohemian Pils, I believe it is the non-floor malted type.

First decoction did not raise the temp as much as expected, only 150 instead of 158.  Added boiling water to get it the rest of the way.

Topped off with 1 gallon of chilled spring water and the starter to make 5 gallons. Starter looked less than active, but it seemed to be producing a small amount of CO2. Shook to aearate. Left at 48 ambient to get fermenting.

No activity after 48 hours, shook several times and upped temp to 55.

12/28/30 Sample was a bit buttery, so I pulled it out of the fridge and roused the yeast once a day for a few days.  Four days later the diacetyl was gone.

2/9/11 Turned out pretty well despite the fermentation fail.  Next time around (beside active lager yeast) I'm planning on switching the malt to the floor malted variety, and adding an addition ounce of Saaz at the end of the boil.
The Mad Fermentationist (Mike) at 6:37 PM