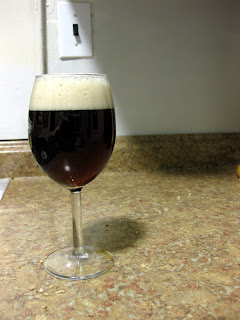 I usually try to keep session beers on tap, but at ~8% ABV I broke that rule when I put on the Bière de Garde I brewed near the start of September. It has been a good complement to the ~4% Bretty Belgian Single, especially since my father and my housemate have been doing their fair share of the heavy lifting.

Appearance – Clear chestnut-brown body topped with a dense off-white head. The head slowly trailing sticky lacing behind it down the sides of the glass.

Smell – Big toasty malt aromatics (rustic bread) mixed with strong fruity esters. The fruit character is dark enough (almost reminiscent of brandy) to match well with a bigger/darker beer, not nearly as fresh-grape-ish as it was in the lighter beers I've done with the Wyeast Kolsch strain.  Maybe a hint of spice from the hops, but not much.

Taste – Dry upfront, but with a nice lingering toffee sweetness in the finish. The malt comes through more than the fruit, with complex toasty aromas. It smells like a loaf of bread that has a couple of spots on the bottom that are almost charred. Enough bitterness to balance the slight bit of sweetness, but no more. A bit of warming alcohol in the finish as it comes up to temp.

Mouthfeel – Medium body, with a lively carbonation that ensures it isn't too heavy. Just about right, but if it was bottle conditioned I might have gone slightly higher on the carbonation.

Drinkability & Notes – I think this is a great beer, sort of a French Doppelbock. A bit maltier and sweeter than most of the commercial versions of the style, but nothing objectionable when there is snow on the ground.
The Mad Fermentationist (Mike) at 6:12 PM