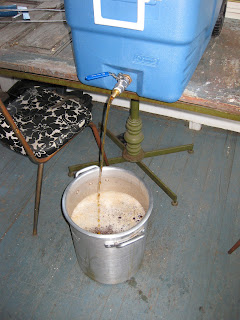 After Nathan and I brewed East End's recipe for Kvass, we decided to crank out a couple more kvasses with recipes of our own design. The first was inspired by a sample of Menno & Jens (a gruit that had a unique flavor that was smokey, tart, and herbal) a collaboration between the two Scandinavian breweries (Haandbryggeriet and De Molen).

Nathan took the standard kvass recipe and morphed it into a complex Scandinavian gruit.  The smoke character came from three pounds of Weyermann rauchmalt, a sizable addition for a beer that barely topped 4% ABV.  For winter spicing we added blue spruce (for evergreen aromatics) and elderberries (for dried fruit character).  The sourness was provided by Lactobacillus resident in the dried bread yeast working unconstrained by hops.

This was the first batch of beer I have brewed that was devoid of hops.  While today beer and hops are culturally (and in some cases legally) synonyms, this has not always been the case.  For centuries political and religious institutions required the use of gruit (a secret spice blend often containing mugwort, yarrow, marsh rosemary among others) both as a counterpoint to the sweet malt (beers were often far less attenuated than today) and as a way to tax/control brewing.  Hops became the dominant seasoning for beers only about 500 years ago, as a result of their ability to add bitterness as well as inhibit lactic acid producing bacteria. 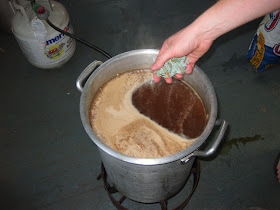 Our method of incorporating the bread (by soaking it overnight in 190 degree water, pureeing it with a stick blender, and then adding it to the boil) was identical to our previous batch of kvass, but this time we used a loaf of pumpernickel bread in place of the standard seeded rye.  We hoped the darker bread would be a better complement for a slightly stronger beer intended for fall/winter drinking.

The results were intriguing, one of the most flavorful low alcohol beers I have tried.  Granted the beer is still young, but it turned out a bit smokier and not as sprucey as we intended.

1 gallon of pumpernickel bread puree (1 loaf) added before the start of the boil.

Pitched 1 gram of rehydrated Red Star bread yeast once the wort was cool.

10/08/11 Turned out well, powerful smoke (mingling with the spruce) and as predicted bread yeast and no hops made for a tart beer.
The Mad Fermentationist (Mike) at 9:04 PM