I've settled into quite a rhythm with the way I make sour beers.  However, there are loads of other routes to take.  While New Glarus, Cascade, Russian River, and Ithaca all make some delicious sour beers, the ways they do it vary considerably.

I'm hoping to try some different methods to see if there are any techniques that can help me to make my sours taste better, be more consistent, and get ready to drink sooner.  The first of those departures was an Oud Bruin using a method based on the way New Glarus (reportedly) sours Raspberry Tart, Belgian Red, and some of their Unplugged beers.  The results were interesting, and it certainly was faster than brewing a sour the old fashion way.  However, without the slower multi-microbe fermentation the sourness comes out somewhat flat (I also fermented part of this batch with 100% Brett Brux, which will make for an interesting comparison). 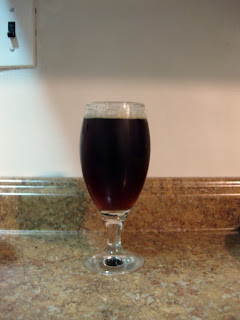 Smell – The aroma comes across as toasty, a combination of the malt and the oak. There is a vinous character that increases as the beer warms a bit.

Taste – Mellow tangy tartness. A friend of mine commented that he didn't think it tasted lactic, but I think it is just lower level and “cleaner” than most sour beers display. It has a bit of oak character (spice with some vanilla), but it doesn't come across as excessively tannic. The balance of slightly sour with slightly sweet is interesting, and one I don't taste too often in beer.

Mouthfeel – Medium body with medium-low carbonation. The body is nice for a dark sour, which often are a bit too thin for me.


Drinkability & Notes – I go back and forth on this beer, sometime I like it others it comes across as a bit vegetal. Even when the beer is “on” there is just something about the combination of flavors that doesn't send me back for a second pour from the tap. It is an interesting beer, but I think I may evacuate the last few gallons from the keg to add fruit and some Brett.
The Mad Fermentationist (Mike) at 10:11 PM