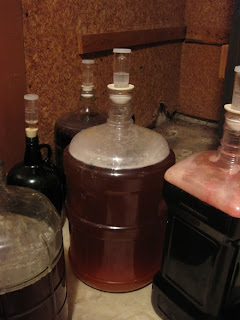 Belgian Tripels have never been among my favorite beers.  When done right I can certainly appreciate them, but something about how yeast forward they are without much hop or malt complexity doesn't tug at my taste buds.  While the definition of the style can be myopic, the beer can be a jumping off point for other flavors.  For example three years ago I brewed a tripel with an assertive American hop character.  The result was a blend of fruity hops and spicy yeast that I really enjoyed.

I hadn't been planning on brewing another tripel until a few months ago when my friend Nathan shared a bottle of Buteuse Brassin Special a complex funky elixir from Le Trou Du Diable. It is a tripel dosed with Brett and aged in barrels that previously held distilled apple cider.  The fruit pulled from the barrel and spicy funk imparted by the Brett blended wonderfully to make a beer of great depth.  The result was something I wished Captain Lawrence's Golden Delicious had been (too much barrel character for a clean tripel to support).

Buteuse Brassin Special reminded me of a sample of Allagash's Tripel Roeselare (Tripel aged for 2 years in oak wine barrels with Roeselare yeast culture) that Rob Tod brought to one of the Lupulin Slam Reunions here in DC.  It was never bottled, which is a shame because it had a wonderfully sourness with a great wet oak basement funk. Tröegs Splinter Gold is another example of a sour/funky barrel aged tripel, and one that I'm sorry to say I have not gotten the chance to try (yet).

So I decided to brew a funky tripel along those line, with apple brandy soaked oak as well as a full complement of microbes.  I took just the first runnings from a simple mash of pils, wheat, and carapils (a Petite Saison came out second - more on that later) and gave the wort a light dose of hops.  The Westmalle strain and a pack of Roeselare Blend got the first crack at the sugars in primary.  After a couple weeks I racked the beer to secondary and added a culture from Russian River Temptation that my friend Matt had isolated (two lactic acid bacteria and one yeast) and propagated.

I waited to add any sugar until the beer was in secondary to give the microbes a chance a multiply before the alcohol got too high.  I may add more sugar down the road, but it will depend on how the beer develops. Along with the sugar I added 1.25 oz of French oak that had been soaking in Daron Fine Calvados for a couple weeks.  I may dose the beer with a few ounce of the liquor later to add more character, but this early on I didn't want to boost the ABV more than necessary.

Ran off ~6 gallons of 1.060 first runnings for the tripel (lower gravity than expected).

Chilled to ~75. Trappist High Gravity plus Roeselare in primary pitched directly from swollen packets. Shook for 2 minutes to aerate before pitching. Left in 60 degree basement for fermentation (wish I could have gone warmer, but I was using my heating pad on the saison).

11/14/10 Racked to secondary, gravity down to 1.025. Added 1.25 oz of French Oak soaked for about 2 weeks in Calvados (waiting to add actual liquor). Added .75 lbs of table sugar boiled for 5 minutes in 12 oz of water, and cooled before adding. Also added a culture from Temptation from Matt, he said two strains of lactic acid bacteria and a yeast(could be Sacch or Brett).  Slow renewed fermentation after 12 hours.

4/11/11 Nice fruity flavor with a bit of funk, but still not much acidity.  The warmer summertime temperatures should get the lactic acid bacteria into gear.

4/9/11 Only made it down to 1.011, even after all this time. Bottled one gallon with .5 g of Premier Cuvee and .9 oz of cane sugar. Kegged the rest with about 2 oz of whole Citra (my scale was having issues) and hooked up to gas in the kegerator.

5/16/12 The dry hopped version is spectacular, bright citrusy, fresh, balanced... and at 8.2% ABV a bit too drinkable on a hot spring night.

820/12 The plain portion is pretty good. Good balance of oak and yeast. Only a slight funk and nearly no acidity, but it works.
The Mad Fermentationist (Mike) at 8:30 PM