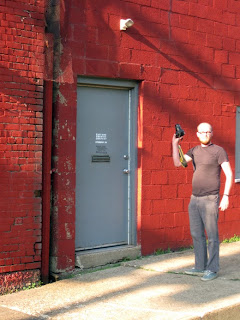 On a hot Friday night in July, Nathan and I made the four hour drive to Pittsburgh to assist at East End Brewing (and eat and drink our way around the oft overlooked city for a few days).  That weekend was my first trip back to the city since graduating from CMU in 2005, not counting a quick lunch break during a drive to Ohio a year earlier.

I'd emailed back and forth with Scott (the brewer/owner of East End) while I was getting ready for my first attempt at brewing a version of his kvass a few years ago, so I was really looking forward to seeing his process in action.  I even brought the final bottle of my Sourdough Kvass to share with Scott; sadly the various microbes from the culture had been slowly working during their two years in the bottle causing me to spray him with most of the beer... 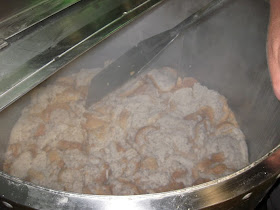 Our Monday morning brew was preceded by a Sunday evening of slicing up rye bread and mixing it with hot water to soak overnight.  The brew was a bit on edge, between the pump struggling to lift enough kvass to fill two barrels in the attic, and Scott's glycol cooling system being in the process of dying.  However, we were able to complete the brew and get the wort (bread goo and all) chilled and transferred.

Scott rewarded our hard work (squishing bread and scrubbing kettles) with a sample from a recalled keg of the accidentally sour kvass he made a few years earlier (something he hopes to recreate and enhance with the barrels in the attic).  While we talked about his series of session ales and future expansion plans for the brewery he opened bottles of Illustration Ale (a caramelly Belgian strong dark), and Gratitude (his wonderfully smooth barley wine). 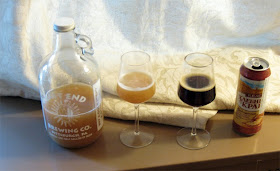 A few weeks later Brian (who we'd stayed with while we visited Pittsburgh, and whose wonderful wife Dayna had driven the three of us around town) sent us a growler of the batch we'd helped to brew.  The beer was murky, with a bold caraway aroma and a bready body despite the low alcohol.  It was that rare sort of beer that is complex and unique while remaining light and drinkable.  We tried it along side a can of Russian Kvass, which was more like raisin-malt soda than anything else (All Star Bakery makes the only passable low/no alcohol version I've tried). 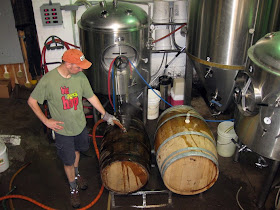 A few weeks after returning to DC we brewed a beer based on Scott's recipe, with a loaf of sourdough rye I baked substituting for the loaves from Wood Street Bread Co used in the original.  The beer turned tart quickly as a result of the bread yeast, minimal hopping, and warm fermentation.  Making this beer is a gamble, my first two attempts at the concept were fermented cooler and didn't sour. If you don't want a sour beer adding more hops would help as well (10 IBUs would give some protection without being noticeably bitter).  Luckily the recipe works well with a bit of sourness, sort of like a Berliner Weisse with a splash of kummel (something Michael Jackson mentions in his Great Beer Guide as an alternative to the iconic sugary red and green syrups). 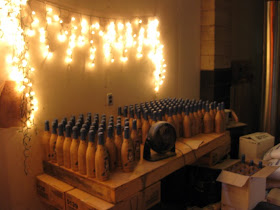 We sent a more detailed article about the time we spent at East End and Kvass in general to BYO (subscription link) a couple weeks ago, it should be appearing in the November or the December issue.  Over the next couple weeks I'll post the recipes for the two other versions of kvass we brewed as well.

I'd also like to thank the people who came out for the event at Beer Table on Monday night, it was nice to put some faces to names (and taste some excellent homebrews).  It sounded like people really enjoyed this batch and the other kvasses we brought. 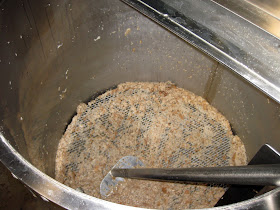 Mashed at 152 added some boiling water to bring the temp up before running off the first runnings. Batch sparged with ~2 gallon of water.

3 g Willamette and 6 g ground caraway added at the start of the boil along with 1 gallon of water with a loaf of home baked sourdough rye bread that had been soaked overnight in 190 degree water then pureed with a stick blender.

Bottled 9/24/10 with 4.5 oz of corn sugar. Formed a pellicle and developed a clean crisp sourness. Gravity was a bit higher than expected at 1.011.

10/28/10 The beer turned out well, and the sourness and carbonation seem to be stable.
The Mad Fermentationist (Mike) at 9:04 PM