The two types of beers that benefit the most from being drunk fresh are German wheat beers and hoppy American beers (in my humble opinion).  So after just a month in the keg I didn't want to wait any longer to do a tasting of my Hoppy Hefe.  Incidentally a friend of mine just had a pour of Brooklyner-Schneider Hopfen-Weisse (close to two years old now) at a local bar, apparently not surprisingly it was a poor choice of beers to age.

The wonderful cloudy appearance of my beer despite being on tap made me think of a claim I've heard several times recently, that protein rests don't do anything (much?) because the protease enzyme is denatured during the malting process (Michael Lewis is often cited as the source, Brewing p.199).  Brewing with Wheat on the other hand suggests that many German breweries do a protein rest to break the proteins down enough that they won't clump together and fall out of solution quickly in the bottle.  I haven't done a side-by-side experiment, but I'm not sure that this beer would have stayed so cloudy after 10 days close to freezing and another month in the kegerator at 40 without the rest at 125 F. 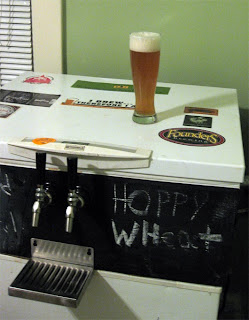 Appearance – Beautiful fluffy whipped egg-white head. The beer beneath the head is perfectly cloudy/hazy without looking muddy (although there are some small hop bits floating around in there).  The hops along with the small amount of crystal really help the head.

Smell – The aroma has a beautiful combination of bright/resiny citrus hops and a light peppery-fruity yeast. A few weeks ago the yeast character was dominant, then the hops took over as the dry hops went to work, now that they have faded slightly the balance is just about right for my taste.

Taste – Nice clean, crisp bitterness that lingers for a moment. Similar to the aroma the yeast and hop flavors mingle nicely with the IPA qualities outshining the hefeweizen slightly. Sadly the hops cover up most of the bready/malty components, but for the big citrus it's worth it.

Drinkability & Notes – As much as I hate that its getting towards the middle of September and still 90 F, it certainly makes me appreciate this beer. While I like the base hefeweizen (which I'll post the review for next week) this beer is so unique and drinkable that I've been reaching for it much more often.
The Mad Fermentationist (Mike) at 9:51 PM