I think I've done enough musing about hefeweizens already the last few months (with the recipe for this beer for example), so I'll keep this brief.   I'm really happy with how this batch turned out (both this part and the Hoppy Wheat), its nice when one of my schemes actually works. At some point I'll have to take a cue from Jolly Pumpkin Weizen Bam and do a soured version of this recipe... 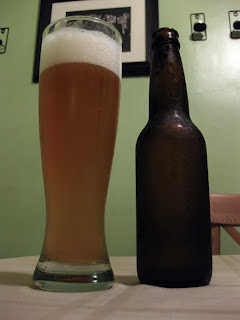 Appearance – A very fine haze, with no particles floating around. The color is golden, but with a slightly brown tone that makes me think of a dried leaf. The head is dense and thick, but it sinks to a ½ finger after just a few minutes. The extra hops in the hoppy half really boosted the head retention by comparison.

Smell – Big ripe banana from the first whiff, with general fruitiness that follows. A light bready malt backs up the fruit. There is some spice as well, but it is too light to say if it is clove or cardamom.

Taste – Banana, but it isn't overwhelming like it can be in some versions. Some apple fruitiness is nice as well, and it doesn't have any of the bubblegum that plagues batches that are fermented too warm (in my opinion...). The yeasty/wheaty dough character is nice, but it could be a bit more like baked bread with a touch of toast. The clove really comes out when the beer warms a few degrees.

Mouthfeel – The wheat adds some substance to the body that you just don't get in a 5% beer with just barley. Carbonation is firm without being fizzy.

Drinkability & Notes – Other than the worse-than-expected head retention, this is spot on for the style. I may even like this batch more than the original batch (which had a nicer head, but not the rich mouthfeel), it's close either way.
The Mad Fermentationist (Mike) at 10:39 PM