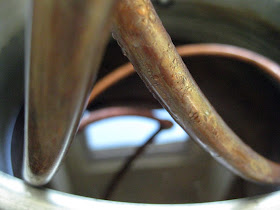 Inspired by my favorite pale session smoked beer (Helles Schlenkerla Lager) and a sample of Denison's Dunkle I decided to brew a smoked dark lager.  Doing low gravity smoked beer is a balancing act, too much smoke can destroy drinkability, while not enough and the smoke character disappears after the first few sips.  The biggest problem is that the smoked malt itself is variable, mellowing with time and exposure to the air (smelling and tasting it before finalizing your grainbill is important).

Equal parts Vienna/Munich/Pils is a base malt combination that has worked for me in a couple beers (e.g. Flanders Red), so I just swapped out the pils for Weyermann Rauch (beechwood smoked) malt.  I was planning on using carafa special for adding color without much roast flavor, but when I looked through my specialty malt box on brewday the closest thing I could find was chocolate rye (which is dehusked and so has a similar character). I went pretty easy on the hops (all Saaz), since I didn't want the bitterness to get in the way of the malt. 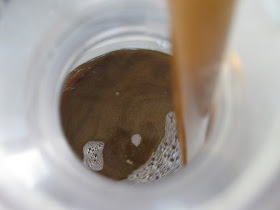 This was my first time using Saflager W-34/70 (a dried lager yeast) and I was less concerned with achieving an ultra clean fermentation because the complex malt and smoke will help to cover up some minor fermentation sins.  Fermentation took longer than I expected to take off, which was probably due to under-pitching by about 50%.  I pitched the yeast into the wort once it reached 50 degrees (which took several additional hours in the fridge post cooling with my immersion chiller), which is also a couple degrees lower than the yeast lab recommends.

When the beer is done lagering it should be a perfect beer to have on tap for the summer, the dark malt and smoke will be a nice match for grilled food and barbecue, and the low alcohol will keep it refreshing.  Some time this summer I'm planning on smoking some malt myself, but I'll talk about that another time (happy to take any malt smoking tips that anyone has though).

Dissolved Whirlfloc and Yeast Nutrient in warm wort before dumping it into the boil.

Chilled to 80 (ground water is around 70 these days), strained, left most of the trub behind leaving closer to 4.75 in the fermenter, put into fridge at 50.

8 hours later gave it 60 seconds of O2, and pitched the dry yeast straight in.  Left it rehydrate and gave it a shake an hour later.

36 hours later there still weren't any signs of fermentation, so I gave it a swirl and upped the temp to 55. 8 hours later a small krausen had formed.

6/13/10 Racked to a keg.  Flavor was good, a bit of tea like flavor from the hops.  Audrey thought it had a bit of tartness, but I couldn't pick up on it.  Lagers are often a few tenths of a pH point lower than ales, so that may have been all it was.  Put of gas and shook several times to get some CO2 into solution then moved to the fridge at 40 degrees to lager.

7/3/10 Moved to keggerator and hooked up to gas.  Keg seemed to be leaking, not much pressure left.

7/15/10 Tasting of this one, turned out to be a great beer.  Subtle smoke, nice dark malt character, balanced, great with food.