After producing koji (mold coated enzymatic rice) for my first batch of sake I moved onto the moto (yeast starter).  Unlike beer, where literally hundreds of yeast strains are used, and most well known breweries have at least one proprietary house culture, most sake producers use one of just a handful of yeast strains.  Luckily the most popular is available to homebrewers from Wyeast as 4134 Sake #9.  The strain is known for its light, but complex esters and high alcohol tolerance.

Traditionally high grade sake is made from short grain rice that has been highly polished.  The further a grain of rice is polish down the more of what remains is starch.  Much like wine grapes, there are certain varieties of rice that are highly prized for sake production.  Sadly there isn't any sake polish/variety rice available locally, so I went to the big local Asian grocery store (Great Wall) and picked up a 15 lb bag of Nozomi "Koshihikari" rice, the most expensive sushi rice they had (it was still only $20).  Using less polished rice may mean that my finished sake will have a yellow hue and some extra rice flavor, but it should be fine for a novice sake drinker.

When brewing sake, just like strong beer, the yeast cell count needs to be brought up before the the main fermentation starts.  Instead of making a starter from malt extract though, koji is mixed with washed/soaked/drained/steamed/cooled rice and water (laced with Epsom salt and yeast nutrient) and allowed to sit for two days while the enzymes start breaking down starches into sugars.  By the time the two days had passed and I was ready to pitch the yeast into the starter it looked like fermentation had already started.  Once the yeast is added to the starter and given time to start fermenting at a cool temperature it needs to be stirred twice a day for three days then once a day for three more days, to distribute the yeast and enzymes. Hopefully the sake strain was able to out-compete whatever other microbe(s) got in there. 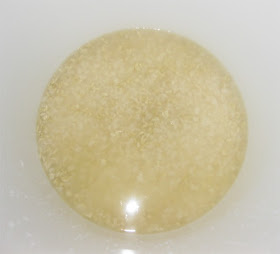 After the yeast finished fermenting (6 days), I chilled the starter to 50 for five days.  During this low temperature rest lactic acid bacteria (since there are no hops to inhibit them) do what they do best, produce lactic acid.  This adds a hint of tartness that helps to give balance to the finished sake. At this point the starter tasted yeasty, alcoholic, and a bit tangy (which seemed about right to me).  A less traditional method which speeds up production, involves skipping this stage and dosing with lactic acid.

Despite the fact that things are going smoothly, the sake "brewing" process is starting to test my patience a bit; after nearly three weeks of work (soaking, steaming, stirring etc...) I have about a quart of liquid to show for my effort. Luckily now that the yeast is ready I'll be ramping up the batch to four gallons (the full volume) with additions of rice, water, and koji over the next four days.

5/05/10 There already appeared to be a small fermentation going after 48 hours. I pitched the smack pack of yeast and put the bucket into the cooler at 50 degrees to ferment.