I quickly kegged my Golding Medal Bitter before heading off to New York at the start of April for work, by the time I returned two weeks later I had completely forgotten that I needed to post a tasting of it.  It turned out nicely, certainly the closest I've gotten to my ideal English pale ale (mostly thanks to the terrific 1968 London ESB yeast from Wyeast).

I've been a bit slow on posting reviews for several of my already bottled and carbonated beers so I'm planning on posting one a day for the next week or so. 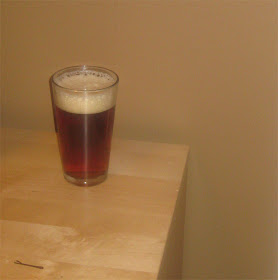 Appearance – Brilliantly clear amber-orange with a sudsy white head perched on top. Acceptable head retention given the low carbonation, as well as some pretty lacing on the glass.

Smell – Nice toasted malt aroma with some earthy (almost dank) hop aromatics bringing up the tail end. There is some yeast fruitiness as well, but none of that “mineral” character that several other British strains (Burton/Thames most notably) give.

Taste – The biscuity English malt takes the lead, I think the Amber malt really helped to accentuate the Marris Otter I used as the base. A bit sweeter than I intended, but it is still well balanced by a firm hop bitterness. There is just a hint of cocoa powder in the finish that wasn't there when I first kegged the beer. Light fruity yeast character that adds complexity, but doesn't get in the way.

Mouthfeel – Medium-full body with a smooth, soft carbonation (actually softer than it was a few days ago, just noticed my CO2 tank is empty).

Drinkability & Notes – A great session beer with a nice malt character. Next time around I would either lower the OG to 1.045 (as I intended) or up the hops and drop the mash temp slightly to shift the balance towards the bitter and dry.
The Mad Fermentationist (Mike) at 9:44 PM