From time to time I let in to my urge to brew at times when I would be better off waiting.  As a result I have brewed when I'm not feeling well, have other things I should be doing, or when I don't have enough time.  A few weeks ago I had just that sort of night when I thought it would be easy to pull off a double (10 gallon) batch of "no-boil" Berliner Weisse after arriving home from work around 5... after having to fight through an epic fail of a stuck sparge I didn't get to bed until after 1 am.  Luckily, despite the issues, the rest of the brew went as planned (hit my gravity/volume/temps). 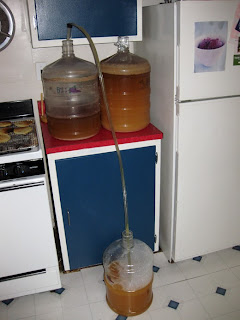 The low gravity and lack of a boil made pulling off a 10 gallon batch with a 5 gallon mash tun and a 10 gallon boil kettle possible.  I followed a similar recipe and procedure to my last batch of Berliner Weisse (which I'm down to a single 750 ml bottle of now that I sent three bottles to the final round of the NHC), the only major recipe change was that I reduced the wheat malt from 40% to 33%.  I also pulled a bigger (hopped) decoction and actually hit my target Saccharification temp (145) when I returned it to the main mash.  The first runnings looked milky (starch?), and quickly the sparge ground to a halt.  I stirred in some rice hulls, and eventually got the mash to drain at a trickle pace.  It took about two and a half hours to collect the nine gallons of wort I needed.

I heated the wort to about 210 undiluted at 1.045 and watered the rest down to 1.032.  The low and high gravity portions each got a pint of a Lactobacillus starter (made of apple juice) along with half a pack of US-05.  I'll add some bottle dregs to both for some added complexity when I move them to secondary.

Berliner and his Big Brother

Notes
------
5/02/10 Pitched a tube of White Labs lacto into 1 qrt of apple juice (Safeway - Vitamin C fortified). Both were at warm room temp (~83). Added a 1/4 tsp of yeast nutrient after a day.  Took 3 days to show signs of activity, then took off. Added another pint of apple juice at the start of the brewday.

Pulled a thick 6 qrt decoction, actually hit my temp when it was added back.

After 24 hours raised ambient temp to 68

Berliner Weisse down to 1.003, not much sourness. Will add some dregs soon, although not much left for them to eat.

Berliner Lambic down even lower, 1.002, added 1 oz of oak that had soaked in Sour Squash for additional bugs. A bit more sourness, but still mild.

6/5/10 Added the dregs from a bottle of Captain Lawrence Barrel Select #1 to the lower OG half.

10/15/10 Added a small handful of oak from my Turbid Lambic to up the bug content on the Berliner Lambic.

3/13/11 Interview and tasting of this Berliner Weisse with BBR.

3/16/11 Tasting of the Berliner Weisse half.  Really happy with this one, nice assertive acidity, good carbonation, lots of complexity.

4/24/12 Tasting of the Berliner Lambic, it is fine, but not great. I like the standard half much more.

5/7/12 The standard version scored a 38 at NHC, but failed to place despite scoring higher than my Cabernet Lambic which won the category. Snippets of the judges' notes.
The Mad Fermentationist (Mike) at 4:41 PM