I kicked the last of my Double IPA unexpectedly on a Friday afternoon a few weeks back (not a great way to start a weekend), sad to see a delicious beer gone (although the huge hoppy aroma was already fading).  Despite how hop saturated that batch was, a keg of it failed to completely satisfy my hop-tooth; with the warm weather arriving in DC I wanted something hop forward, but without the high alcohol.

Two days later I woke up early on Sunday morning in the mood to brew.  I decided to toss together a light/crisp/hoppy beer with the ingredients I had on hand (one of the big advantage to buying in bulk and owning a mill). 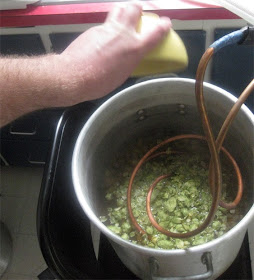 For malt, I didn't have enough American pale on hand to use it as the sole base malt, so I augmented it with German pils.  I had some Maris Otter on hand as well, but I didn't want too much malt character getting in the way.  I added a bit of flaked corn (left over from my Pannepot inspired spiced Belgian strong ale) to help dry the beer out.  Some Simpson's Golden Oats went in as well for a bit of nutty malt complexity.

For hops, I used all Citra, with .75 oz at 15/10/5/0 min plus .5 oz in the keg.  Citra is a pretty new variety used most notably in Sierra Nevada Torpedo.  Citra is in the same general "American" family as other popular newcomers like Simcoe and Amarillo, but it leans heavily towards tropical/citrus flavors (not much pine).  I wanted to use it alone to get a real idea of what they bring to a beer.  Since this was a relatively light (1.046) beer I didn't want a lot of bitterness (33 IBUs), so I skipped a bittering addition, relying on the late boil additions for everything (a technique sometime called Hop-bursting). 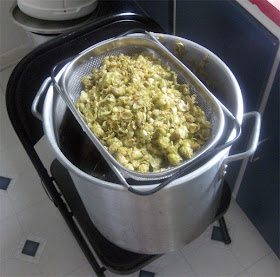 For yeast, I used a sachet of US-05 (something I always try to keep on hand for stuck fermentations and spur of the moment brews).  US-05 is a clean American ale yeast, supposedly a dried version of the the liquid strain sold by White Labs as 001 and Wyeast as 1056 (US-05 was originally marketed as US-56 until Wyeast complained).  The dry strain has become very popular with homebrewers and craft brewers because it is clean, cheap, and easy to use (a high cell count for the money eliminates the need for starters).  That said, I find US-05 more attenuative than the liquid variants, so I mash around 5 degrees hotter when using it.  I also find that US-05 is a bit fruitier (peaches?) than the liquid strains, but in a hoppy beer like this it should be complimentary.

Inspired by a couple fruit (mango and peach) IPAs I tried from Cigar City Brewing, I took just less than a gallon of the beer after primary and racked it onto 1.25 lb of papaya (cubed, frozen, thawed, quickly dipped in Star-San). The combination of fruit and American hops is something I had never been impressed with before (Dogfish Head ApriHop...), but the Cigar City beers had a great balance allowing the fruit to add complexity without disrupting the hop forward nature of the base IPA.  They also make a version of it with dried papaya that I had heard good things about, but when I saw the fresh fruit at the store I decided to go that route.  After two weeks on the fruit I'll bottle the papaya portion separately. 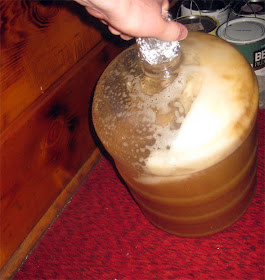 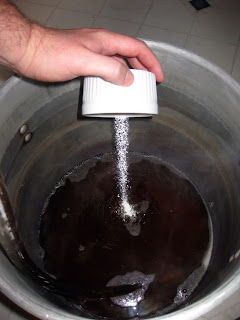 Added some of the sparge water to the mash to make sure there was enough room to collect wort using a single batch sparge.  Added 3 g of gypsum to the boil pot to up the sulfate because I didn't need to lower the pH of the mash.  Batch sparged with 178 degree water.

.5 tsp of Irish moss and yeast nutrient rehydrated in water for a few minutes before being added to the beer.

Chilled to 72, pitched dry yeast directly out of packet, shook for a minute 3-4 times over the first couple hours to aerate.

5/02/10 Fermentation mostly finished.  Got a papaya to cut up and rack one gallon of the beer onto.

5/04/10 Fermentation mostly complete.  Racked 3/4 of a gallon onto 1 lb of cubed papaya, that had been frozen, thawed and dipped in Star-San.  The rest was kegged with 1.5 oz of cane sugar, as my CO2 had just kicked.

5/23/10 Papaya version tasting, tasty beer, but not much papaya character.