A few months back Nathan and I got together with our friend Tim to brew the experimental recipe he came up with for the interview he did for BrewLocal (our craft-brew-centric-side-blogging-project).  Tim was one of the brewers at Old Dominion Brewing Company in Virginia before they moved their brewing operations to Delaware a few months back, he now works for the FDA.  His original recipe was for a roasty/hoppy rye beer fermented with a lager strain, but we decided to make 10 gallons and ferment half with clean ale yeast (1056) and half with lager to compare (sadly the plan didn't work out, but more on that later). 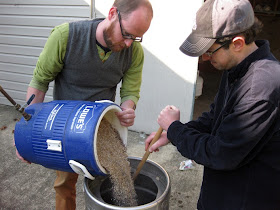 It is an interesting recipe, mostly pils, with some dark malt (both carafa and roasted barley), and flaked rye that Nathan toasted in the oven until it had a crisp texture that wouldn't have been out of place in a bowl covered with milk.  The hops were Hallertau Select (probably Tim's favorite variety) and Saaz.  A cool recipe that I doesn't compare to anything else I'm aware of, roastier and hoppier than a Schwarzbier, too clean and the wrong hops to be an American Porter etc... The brewday went smoothly although with three cooks in the kitchen some of the hops got added earlier than we had planned, and some minor adjustments had to be made to compensate.

The lager yeast starter that Nathan made never took off.  As a result the lager yeast portion of the wort ended up being pitched onto the yeast cake from the ale half.  Since the wort was refrigerated until it was pitched with ale yeast there didn't seem to be much of an issue, but we decided to add dry hops to cover up any minor off-flavors.  Tim mentioned that he is planning on brewing a batch of it as a lager soon, so it will be interesting to taste the beer as he originally intended it

As it is the beer is slightly roasty/toasty, surprisingly smooth hops (those noble varieties will do that), and very subtle, I could easily imagine it being sold in six-packs to non-beer nerds.  I'll be posting a tasting in a couple weeks, but for the time being I'm in New York City for business.  I've been enjoying the beer scene (made it to Beer Table and Rattle and Hum over the weekend), but my posts may be few and far between for the next couple weeks until I'm back home in DC. 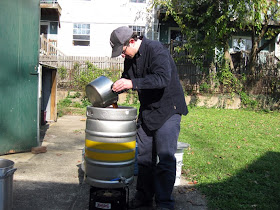 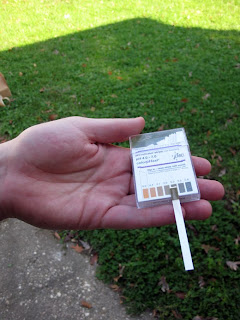 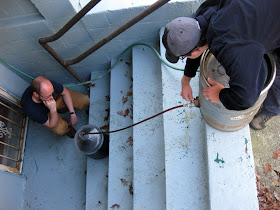 The first in the BrewLocal beer series.

Temp ramp ups were a bit slow in the mash with direct fire on my banjo cooker.

Nathan usually does a 60 min boil so he added the hops earlier than intended for a 90 min boil, as a result we shortened the boil to make sure the IBUs weren't too high.

Chilled to 67.  .5 gallons extra wort/hop/trub which was left in the kettle after racking the rest out. 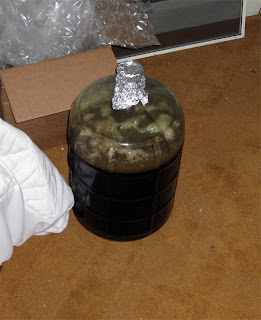 The first half was drained into a better bottle and out into the fridge at 44 (looked very clean).  Pitched ~6 hours later with 60 seconds of pure O2.  The lager starter Nathan made (1.5 qrts) was partially decanted, and smelled pretty buttery. Light foam still after 12 hours, upped fridge temp to 46 to make sure it starts fermenting.

The second half was put into a bucket (with some of the hops/trub), aerated with 60 seconds of pure O2, and pitched with a starter of 1056, left in the basement mid-60s.  Strong fermentation by 12 hours.

11/14/09 The lager half never took off despite multiple swirlings and raising the temperature up to 56.  So I racked it onto the yeast cake when the all half was down to 1.010.  It took off like a shot, huge fermentation.