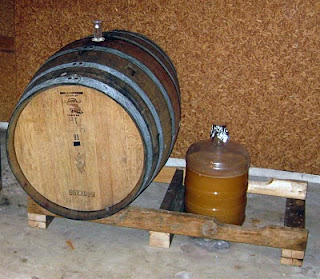 The past two weekends have been my most productive as a homebrewer, at least from a volume standpoint.  My friend Nathan (whose basement houses the two "group" barrels that I have posted about repeatedly in the past) suggested that we get a third barrel, to store at my house.  I contacted Chrysalis Vineyards (the same winery that we bought our first barrel from during fall 2008).  They still had a surplus of French oak barrels that had held red wine, and the price was still the same so I didn't bother contacting anyone else.  The day before the first brew we drove to pick up the barrel, when we got back we had to manhandle it through the snow and down into my basement and onto the simple barrel rack that Nathan had put together.  Originally we had planned to pick up the barrel two weeks earlier, but DC's "Snowmageddon" prevented us from heading out there two Fridays in a row. 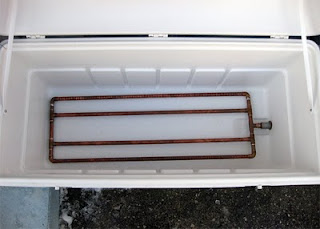 This time though instead of having 7-8 people involved (each brewing five or ten gallons on their own to blend and then age in the barrel), we decided to handle the brewing ourselves with two marathon 27.5 gallon brew days.  This audacious plan was only possible because Nathan has been piecing together a large scale brewing system from a 165 qrt  (40+ gallon) cooler mash-tun, and two 15 gallon keggles (this was his first time using all of it together).  Still we needed my burner, and pots (not to mention garage) to produce that much wort in one day.  The two brew days were surprisingly uneventful, taking about 11 hours each from the time I started to heat the strike water until we finished cleanup. 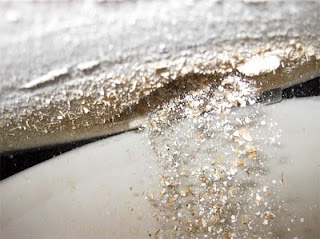 We didn't have anywhere besides the barrel to ferment 60 gallons of wort so we decided to go with a Lambic-esque recipe (since that is the only style that is left to age/sour in primary).  We used mostly pils/pale with some unmalted wheat and oats (although more oats and less wheat than would be in a Lambic), as well as some malted wheat we had lying around.  Not perfectly traditional, but the raw grains will provide some starches for the long souring process, and the simple/clean malt bill should be a good base for some experiments with fruit/herbs/spices (it is too  much beer to drink all of it "plain").  I'll also say that it's a good thing I had a drill to turn my Barley Crusher, not sure if I have the arm stamina to crank through 65 lbs of grain (look at that grain fly!).

For yeast/bugs we used half of the 10 gallon batch of Bugfarm Sour that I brewed a month ago along with the slurry from the other half. It was fermented with a slurry from Al B which contained about 15 strains of Sacch, Brett, Lacto, and Pedio that he had isolated from a number of great commercial breweries.  The yeast and microbes took the first 27.5 gallons of the wort down to 1.015 by the time the second batch was brewed, so there should be plenty of cells to handle the second half of the wort.  We also tossed in the dregs from a couple bottles of Jolly Pumpkin that we drank during the brew days just to up the biodiversity even more. 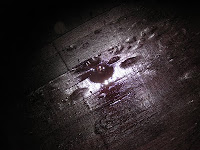 What are the two of us going to do with our 60 gallons of sour beer?  Solera.  The solera concept is most commonly used in vinegar and sherry production (although Cambridge Brewing beat us to solera beer with a sour cherry beer called Cerise Cassée).  The general idea is that on a set timetable some of the liquid in a barrel in transferred out and fresh liquid is added to fill the barrel back up.  In some cases a series of barrels in employed with each barrel being successively smaller and containing an older blend.  Whether one barrel or many, the idea is to create a blend that has already aged together (from a practicality standpoint it also means that we never have to deal with an empty barrel).  We decided a solera would be a good way to tackle a two person barrel since neither of us really has a need for 30 gallons of sour beer at a time (on top of the other two barrels and our own batches).  For more talk about soleras check out the post about the interview Nathan and I did with Basic Brewing Radio a couple months back (or Wikipedia, where I learned the same system is called by the cooler sounding "Perpetuum" in Sicily).

It will probably be a year before we pull the first round of beer from the barrel.  The current plan is to take 15 gallons once a year (replacing it with 20 gallons or so to account for evaporation), this will yield a beer with an average blended age of 3 years after a few pulls.  We will make adjustments to the recipe if the beer is initially too sour, or not sour enough. 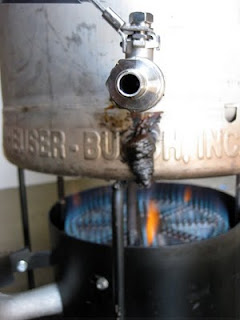 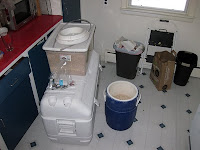 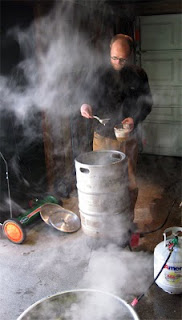 Mashed a whole sack of Pils, plus 4.5 lbs each unmalted wheat and (flaked) oats.

Racked all of the wort to the Chrysalis red wine barrel (French oak from World Cooperage) trying to filter/settle our most of the hops/trub.

Racked in 4.5 gallons of Bug Farm Sour and the ~1/2 gallon of dregs from the other half.  Also added the dregs from a Jolly Pumpkin Bière De Mars.

Hit it with 2 min of pure oxygen.  Left in the basement at around 55.

The combined mixture in the barrel was 1.054, which means the rest would have to average around 1.060, since that is more that I calculated we are probably a bit under volume. 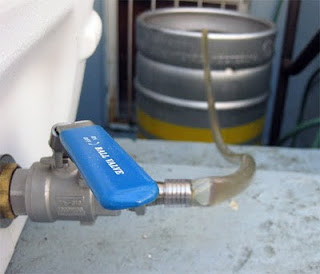 Switched hops to whole cascades to make removing them from the wort post-boil easier.

Divided the hops roughly between the three pots.  We were out of whirlfoc so we added some rehydrated Irish moss with 15 min left in each boil (5 tsp total).

Ended up a couple gallons short of a fill, so filtered/boiled/cooled 4 gallons of water and racked it into the barrel to fill it to the top.  Then I racked 5 gallons of the fully blended wort out to ensure there was adequate head space for the krausen.  Added the dregs from a Jolly Pumpkin Oro De Calabaza (which had just won a NYT Golden Ale Tasting). By the next morning the airlock was going crazy, bubbling probably 5 times a second.

3/13/10  Racked the 5 gallons back into the barrel.  Added 1 gallon of spring water to bring the barrel nearly up to the brim.  Time to wait.

9/17/11 Nathan and I spent the day Bottled 5 gallons. Racked 5 each onto 1 oz of elderflowers, 3.5 oz of Hallertau Tradition, and 1 gallon of Cabernet Sauvignon wine grapes. We then refilled the barrel with freshly brewed, minimally aerated wort. It took nearly a week to start fermenting again.

10/5/11 Bottled Dry hopped and Elderflower versions with a fresh dose of champagne yeast.

1/17/12 Bottled the grape aged portion with 4.5 oz of corn sugar and some rehydrated champagne yeast. Great color and aroma.

2/23/12 Tasting of the Hallertau Tradition dry hopped portion. I think we overstuffed the hop bag and it didn't get enough circulation, hop aroma is minimal. Still a great beer though.

2/28/12 Tasting of the First Plain Pull. The dry hops added more than I gave them credit for, this version tastes more like Petrus Aged Pale than anything else, a bit too clean for my taste in sours (but the oak is terrific).

3/15/12 The Cabernet grape aged portion is terrific. The wine grapes come across as complex, raspberry, cherry, wine, and balance perfectly with the beer's character.

3/19/12 Tasting of the Elderflower version. Nice fruity/floral character, that actually seems to have grown over the few months in the bottle.

5/7/12 The Cabernet version scored a 34 at NHC as a Fruit Lambic, but managed to placed 1st out of 28 beers. Snippets of the judges' notes.

9/7/13 Tasting notes on the two dry hopped version from the second pull. The Nelson/Mosaic/Citra in particular is fruity and delicious.

7/30/14 Tasting of the second pull plain and on flowers. One is too weird, the other not quite weird enough!
The Mad Fermentationist (Mike) at 6:43 PM