Normally I sit on a beer for awhile before I post a review, especially for a big beer, but with this big IPA (that was hopped with Amarillo, Simcoe, and Columbus including 3 oz of dry hops and 3 oz of keg hops) I wanted to log a tasting as soon as possible while the hops are still blaring.  I brewed the batch just 32 days ago, and I've already been drinking it for more than a week. 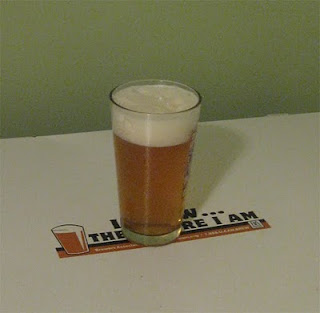 Smell – Pine, tropical fruit (mangoes), resiny, pretty close to sticking your nose in a bag of Pacific Northwest hops. That's pretty much it, no malt, alcohol, yeast, or subtlety (just about perfect in my book).

Taste – Big bitter assault on the back of the tongue that lingers until you take another sip (or a couple minutes if you don't). The volatile hop oils carry through in the flavor as well with similar notes of resinous pine and tropical fruit, as well as citrus (orange) there in the background. A bit of clean malt in the middle, but it stays out of the way of the hops. The alcohol is well disguised for 8% ABV, thanks to the hops. Not balanced in any sense of the concept, but that is what I want from a big IPA.

Mouthfeel – Light and crisp (the sugar really helped out), with moderate carbonation. The bitterness is more a part of the mouthfeel than in any other beer I have brewed, but it is not rough/tannic luckily.

Drinkability & Notes – The epitome of a “West Coast” IPA, highly drinkable if that is what you like. This is the happiest I have been with any hoppy beer I have brewed. I could count the commercial IPAs I would take over this beer (and just about all of them are from Russian River). Hopefully this one keeps drinking this well as it continues to sit on the keg hops. 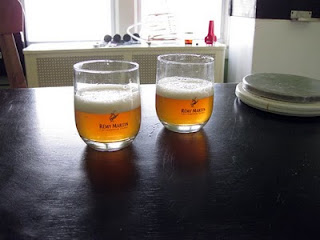 Bonus - I also tried a quick ice concentration (EisPA) on this batch a couple days ago, using the same process I did to make the Dave clone (freezing it overnight and letting it slowly drip through a metal strain for 20 minutes or so).  Instead of aging it in the bottle though I put the concentrated beer into a plastic bottle and used my carbonator cap to give it a bit of carbonation.  It worked well resulting in one of the tastier "massive" IPAs I have had (not hard compared to Dogfish Head 120 Minute and Founder's Devil Dancer).  The hop aroma was just about as aggressive and the bitterness kept up with the increased sweetness.  The alcohol was present (~14% ABV if the 75% increase I got with the Dave clone held true), but we drank it pretty cold so it did not come off as harsh. I think this is a much more practical way to get a giant alcohol/hop bomb rather than fermenting our a very high gravity wort which tends to leave too much residual sweetness.
The Mad Fermentationist (Mike) at 9:10 PM