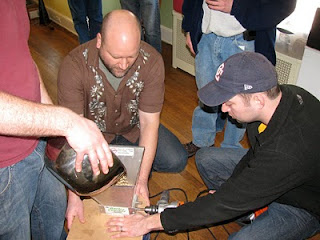 There is something really wonderful about joining an organization right when it is starting up.  I've been attending meetings of the DC Homebrewers club since it was founded in early 2008.  It has been rewarding to participate in the club as it grows and tries to find an identity in a metro-area that already has several larger/older homebrewing clubs.

A couple months back I struck upon an idea, why not get club members together to brew an anniversary beer to celebrate 2 years of DC Homebrewers?  I sent out an email to the club discussion list and got some interest.  Someone suggested that we try to brew a beer with as many local ingredients as possible.  Our definition of local was pretty loose, but we came up with barley malted/smoked by a local distillery, homegrown hops, local honey, and yeast from a local brewpub.
People were great about procuring ingredients and then bringing them over to my house early on a Sunday morning to brew.  Once most of the people (ingredients) arrived we set about trying to put together a malt bill based on what we had on hand.  For awhile it had a too-many-cooks-in-the-kitchen feel, but after awhile we hashed out something that I think most people were happy with.  We decided on a moderately strong stout/porter, in addition to the smoked malt we added plenty of pale malt for gravity, flaked barley for body, and a complex blend of dark malts for depth and balance.

I contributed 1.25 oz of my own homegrown cascades (basically the whole harvest...), but luckily someone else brought some commercial cascades to supplement.  This is intended to be a beer that will age well, so we were a bit more heavy handed with the hops (50 IBUs) to ensure some bitterness remains in a year or two, and we left out late boil hops since the hop aroma is the first aspect of a beer to fade. 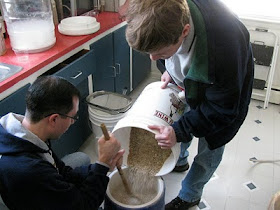 The yeast slurry from District ChopHouse (20th generation Scottish yeast) was gangbusters ripping through the beer quickly despite the low wintertime temperature of my basement.  Scottish yeast is relatively mild in character and great in malty beers, but it will be interesting to see how this one is after so many repitchings.
The honey will be added to the primary fermenter after the initial fermentation dies down. This will preserve as much of its aromatics as possible because the honey will not be subjected to heat or the CO2 scrubbing of primary fermentation.  Despite adding it late in the process I'm not expecting too much character from the honey in a finished beer with so much else going on.

Hopefully the club will repeat this event every February to produce another anniversary beer. A six-pack of each of these beers will make it to the club's anniversary meeting every January, with the goal (a few years down the road) of being able to sample 5-6 different batches once a year.  We spent most of the boil discussing styles to brew in the future (possibly alternating between two different styles, tweaking them as time goes by), but it will probably be next winter by the time the format is determined.

If you want to see more pictures of the brewday take a look at the Flikr page. 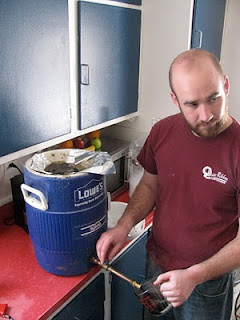 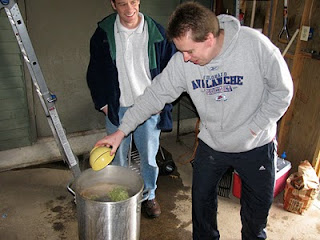 Yeast was a cup of slurry from District ChopHouse, 20 generations.

2/25/10 Added 1 lb of Bee George Honey (Wild Flower Honey from Takoma Park Maryland).  Considering I bought it at the COOP in Takoma Park it seemed appropriate addition to a "local" beer.  After adding the honey I gave the beer a gentle stir with my wine thief to ensure that it was mixed in.

6/23/10 First tasting, good if a bit over-carbonated (I'll be more excited about drinking it next winter, summer is not the right season for this one).