I'd been excited to crack open the second (and final) bottle of the ice concentrated version of my Hair of the Dog Adam clone. I got the chance at a tasting at my friend Dyan's house two nights ago with a three other friends to share the boozy goodness.  We actually had a few ounces left over (due to multiple batches of Supplication and Brute, not to mention a growler of Pliny the Younger) but it gives you an idea of the drinkability of Dave.

We drank it still and pretty close to room temperature, and it showed with a big alcohol burn.  I would have liked to let this sit longer before drinking, but with my concern over oxidation I wanted to try it before it sat in the bottle too long.  I'm going to try carbonating the last few ounce with my carbonator cap to see how it changes. 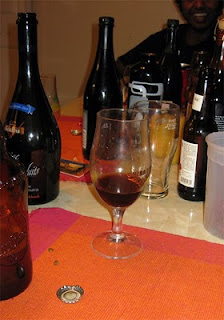 Appearance – Dark brown, but still wonderfully clear when held to the light. The beer is still (expected since it wasn't primed), but it displays some nice legs due to the alcohol and residual gravity

Smell – The oak really comes through with a big whiff of vanilla, as well as some subtler woody tones. The peat is present as well giving it a character reminiscent of Scotch, the big boozy character only helps to reinforce that impression. There is some bready/malty notes as well, but the wood and alcohol drown most of that out. Thankfully there is no oxidation.

Taste – A healthy spirit burn is the first thing I noticed, followed by a rich sticky sweetness. There are some great dark fruit notes (plum, raisin, date) that make me think of port (not that I drink port all that often).

Mouthfeel – Full, no need for carbonation. The alcohol burn is also a component of the mouthfeel, a first for me as a brewer.

Drinkability & Notes – 2 oz was plenty and the five of us didn't finish the bottle, but that is what you have to expect from a beer this big. One oak cube in a 12 oz bottle was too much, but it was close to the right level since the tannins helped to tame the massive sweetness.

I'll certainly try ice concentration again in the future, I'm thinking of doing it for my IPA and the barrel Flanders red just to see how it effects hops and acid (something this beer didn't give an impression of).
The Mad Fermentationist (Mike) at 7:32 AM