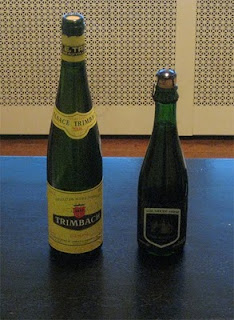 In my three years of blogging about fermentation I've touched on a good number of fermentables including: beer, kombucha, ginger beer plant, cheese, yogurt, pickles, sourdough, mead etc... I thought I had covered just about all of the popular fermentables.  Recently I was reading the Lambic and Wild Ales blog when I came across an article that  mentioned that you can ferment grape juice into a beverage called "wine."  This blogger even had some good suggestions for wines that might appeal to people who are into sour/funky beers.

On that advice I picked up a bottle of Maison Trimbach Riesling at the local good beer store (apparently they have a whole section of wines that I hadn't noticed).  Trimbach is apparently known for their adherence to tradition and hatred of overly sweet (American) wine.  To compare to this supposedly dry/tart wine I also opened a bottle of Oud Beersel Gueuze (blending them together also seemed like a good idea). 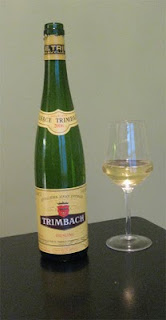 The Riesling is nicely fruity (grape?, lemon), with a moderately dry palette.  The flavor is minerally, and still very fresh despite being from the 2006 harvest.  The acidity is from malic acid (Trimbach does not employ malolactic bacteria to convert it to softer lactic acid), which has a sharper/shorter burst on the back of the tongue than you get in sour beers. The Riesling doesn't have much tannin presence, and the flavors are relatively reserved overall. 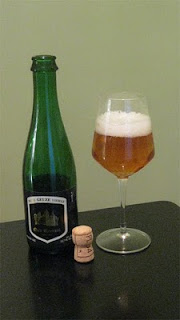 The gueuze really bursts with flavors and aromas (lemons, oak, and similar mineral character) in part due to the carbonation which lifts them up to the nose.  The acidity is pretty similar (this is more balanced than many lambics), but it is dryer and smoother.  The beer also brings that big earthy funk that makes my mouth water.  For my money (about the same ounce for ounce) I'd certainly take the beer, but then that isn't much of a surprise.

A 1:1 blend the wine and beer leads to a bland, lackluster blend with the character from each seeming muted.  The fruit is mellowed, but it still serves to cover up most of the funk from the beer.  A 3:1 blend of beer to wine works much better, with the sweetness from the wine giving the gueuze a more balanced (not that I necessarily like that) and an added fruit character that enhances what it already had.  The Riesling also made a nice addition to a glass of my hoppy saison (and a chicken cacciatore that Audrey was cooking).

Trimbach and Oud Beersel produce two beverages with the same general characteristics (tart, rustic, minerally, fruity, and dry), but the flavors and aromas of the wine just doesn't speak to me in the same way the beer does.  I'm not sure if it is a lack of a wine tasting experience on my part, but I took to beer very quickly once I discovered "good" beer (wine seems like more work).

In truth I have been considering "brewing" a wine for awhile (adding some of the must to one of the sour beers I have aging, in the style of great sours from Cantillon (St. Lamvinus or Vigneronne) and Captain Lawrence (Rosso E Marrone and Cuvee De Castleton).  Alternatively I think red wine grapes would make a great addition to a dark strong ale, as they can have some dark fruit character that I think could blend well with the fruit (a friend of mine went to the Lost Abbey barrel tasting a few month back and had great things to say about their Angels Share on Cab Franc grapes).
The Mad Fermentationist (Mike) at 5:33 PM