Two days after the bottle dregs from Cable Car and Deviation were pitched into the small starter I started to see faint signs of life.  I was pretty excited because with such old/sour beers there is no telling what if any microbes would still be alive.  A couple days later my hopes were dashed by a strong aroma reminiscent of nail polish remover (ethyl acetate most likely) emanating from the starter.  The chemical/solvent aroma only got more intense over the following few days, forcing me to dump the bugs we had pinned our brewing hopes on.  The blame, sadly, most likely falls on the acetobacter that I got a whiff of in my glass of the Russian River Deviation. 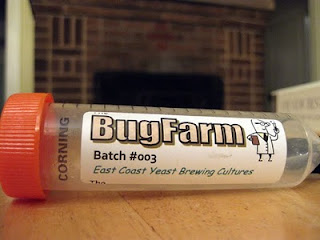 Luckily a couple weeks earlier I had received a vial of Al B's Bugfarm #3 in the mail.  Al is a great homebrewer (if his beer from the Brett 100% Swap is any indication), he is also a microbiologist obsessed with gathering and preserving different yeast and bacteria strains from a variety of sour beers.  Every once in while he sends out the call for people willing to try out his latest microbe blend, for free! (with the understanding that you'll send him a couple bottles in return once his investment matures).

Here is the list of microbes in this batch of slurry.  Some of the more interesting strains include Brett and Pedio cultures from Rodenbach, Russian River, Fantome, Cantillon, Allagash, New Belgium, and Drie Fonteinen (talk about a who's who of excellent funky/sour beer producers) not to mention additional oddball strains from kombucha and sourdough.  Al intends each tube for 5 gallons, so I stepped the slurry up in a starter the night before we brewed. 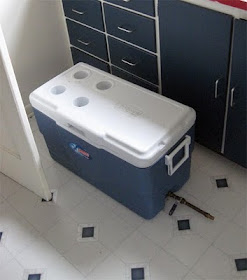 Devin and I planned to make 10 gallons of wort using a big mash tun that I had built years ago, but only used once (it was constructed from a 17.5 gallon marine cooler and a CPVC manifold, but living in an apartment down in DC it didn't seem worth the space it takes up).  Doing such a large batch on my system can only be accomplished by collecting a smaller volume of runnings pre-boil, assuming poor efficiency, and diluting to hit the target volume post boil, since I only have a 10 gallon boil kettle.

Our plan worked pretty well (except for when, halfway through the sparge, the manifold detached from the spigot).  In the end I had to scoop the mash into my usual 5 gallon mash tun to complete the sparge (somehow we still managed to get 60% efficiency). 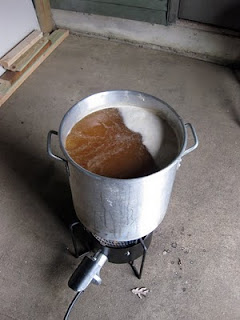 With such a complex bunch of bugs in our employ we decided that it wasn't worth doing too much with the grain bill.  The recipe was pretty simple, basemalt (split between German Pils and Maris Otter for complexity), wheat malt, and some rolled oats (we were inspired to add the oats part way though the mash, with all those bugs I don't really care whether they converted fully or not).  The hops were similarly restrained with just 13 IBUs of Willamette added near the start of the boil.

After chilling, the wort sat in the kettle for a couple hours (while I was enjoying some miracle fruit) before I had a chance to rack/dilute it, you can really see the difference between the top and bottom of the wort (top/clean half on the right, bottom/truby half on the left). 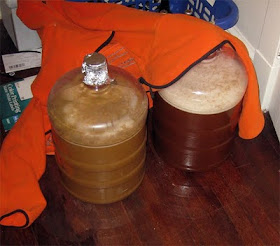 On top of liking sours, Devin enjoys weird/interesting/unique/crazy beers in general... so we have been throwing around a some ideas on what to do with 5 gallons of the batch; flowers, pineapple/orange/guava juice, or starfruit.  We will probably wait until the summer when good produce is in season to decide the fate of this batch

The other 5 gallons will be left plain and used as a starter for the next barrel project, a solera that Nathan and I are going to house in my basement.  The idea will be to pull ~5 gallons every 6 months or so and replace it with a fresh batch of beer.  That way each pull is a slightly different blend and we will always have some great sour beer on hand.  Obviously there will be a lot more on this project to come over the next few months as we figure out the details.

Devin and I both had high hopes for the dregs from those amazing beers, but I think with Al's Bugfarm this batch will still be fantastic.

Notes
------
Made a 1/3 L starter the night before with most of the tube of Al B's Bugfarm #3.  No Yeast nutrient added to the starter, shook vigorously for a few minutes before and after pitching the tube of slurry.

Old Fashion Quaker Oats added with 20 minutes left in the mash as a mid-mash decision.

Mash tun issues with my big one, so I ended up having to scoop the mash into my old tun half way through the sparge.  Collected about 9 gallons of 1.054 runnings in the big kettle, plus ~1 gallon of the final runnings into my small kettle.  Brought the final runnings to a boil and added them to the main kettle after 20 minutes.

Chilled to ~65.  Let sit several hours in the kettle after it had chilled (during the miracle fruit tasting).  Added the starter and topped off with filtered water to 5 gallons in each carboy.  Left at 63 degrees upstairs.

Solid fermentation activity after 12 hours, but it never got really raucous.

6/30/10 Defrosted four 1 lb bags of guanabana/soursop puree from Goya.  Topped off with beer to 3 gallons.  Racked the rest of the beer into two 1 gallon jugs.

7/15/10 Added 1.5 lbs of frozen/defrosted yellow peaches to one of the gallon jugs, skins on pits removed.

7/26/10 Racked the 2 1/4 gallons I could get off of the guanabana, dumped the puree, and racked the beer back into the carboy to continue aging.  Gravity down to 1.008, nice complex tropical addition to the flavor.

Blended the soursop portion with 2 gallons for the Quick Oud Bruin that had been aged on blackberries and black raspberries, and left for some additional aging.

2/15/11 Bottled the plain and Peach gallons.  Yielded ~10 bottles of each.  Forgot to note how much priming sugar we used, probably around .75 oz of table sugar for each one.

6/15/11 The peaches add a layer of complexity without overwhelming the base beer, although I think they could have been a bit stronger.
The Mad Fermentationist (Mike) at 10:12 AM