Aaaand... we're back with the lunch posts! Between Mike's move and my preparations for applying to grad school (GRE = thumbs down), August/September was a little hectic, though we did manage to keep up with the Sunday lunching for the most part. At this point, we've had numerous Sundays to explore the Takoma Park Farmer's Market and settle into a mindset for some cozy autumnal recipes.

A few weeks back when we made this hearty vegetable soup, the weather had just made its first chilly snap of the season ("chilly" here meaning maybe 65 degrees), which naturally put us in the mood for a hot, rich bowl of soup. In this case, we opted for vegetable, given that the summer growing season (at least a few weeks ago) still had a little time left before morphing into squashes/gourds and apples. The key, it seemed, to really kicking up the flavor in this soup was spending some extra time on the broth. Our base started with some roasted mushrooms, tomato paste, leeks and garlic, which complimented without overshadowing the handful of heartier late-summer vegetables we bought at the market. 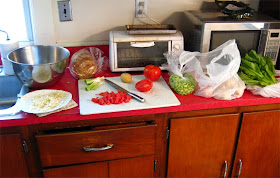 Now, sometimes you get a vegetable soup with a light, unobtrusive broth, which certainly has its time and place, depending on the season (spring to mid-summer) and available produce. We chose to make a broth with heartier substance given the cold snap of late summer. We didn't want to go through the effort of making the broth completely from scratch; so we started with a box of vegetable broth, but from there spent some time to deepen the flavor, tossing olive oil (2 tablespoons), mushrooms (half a pound), and tomato paste (1 tablespoon) together in a cast iron pan. To that, we added an entire head of garlic with the excess papery skin removed and top cut off to expose most of the cloves to the heat. This all went into the oven at a toasty 450 degrees for about 25 minutes, until the mushrooms had given up most of their moisture. 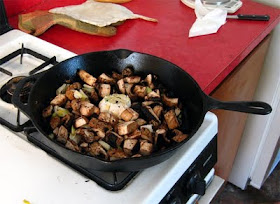 Once the mushrooms et al became all good and roasted, we added them (yes, including the head of garlic) to a cast iron dutch oven with roughly chopped leek greens (cleaned well to get all the grit out!), two quarts of low-sodium vegetable broth, a pinch of thyme and a few grinds of pepper. At this point we didn't add any salt due to the content in the broth as well as in the roasted mushroom mixture. 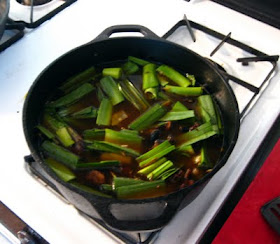 The broth simmered away for about 30 minutes, after which we strained it to collect all the liquidy goodness (sans mushrooms and leeks, see below). Then, it was back to the stove, ready for the vegetables. 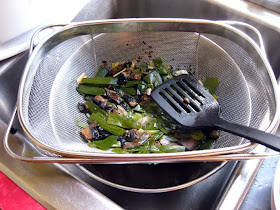 ... but not before we used tongs to squeeze the tender, sweet morsels of roasted garlic from their singed papery pods, mashed them to a paste, and added them to the broth. 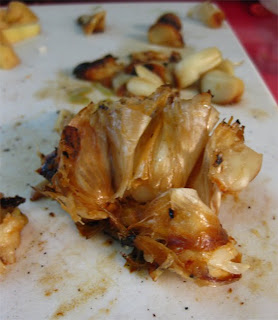 Once the broth came back up to boil, it was simply a matter of adding the vegetables, which we did in steps to keep the more delicate ingredients from turning to mush. In the first round, we added the lima beans, potatoes cut into small chunks and chopped tomatoes, which then boiled for about 20 minutes. After that time passed, we added the kernels from one ear of corn, and a big bunch of roughly chopped escarole (which cooks down a great deal). Five or so minutes later, we had a delicious vegetable soup to enjoy. 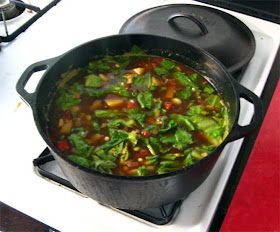 And so down we sat, cozying up to brimming bowls of rich, robust, steamy vegetable soup, of course accompanied by the requisite thick slices of crusty sunflower seed multigrain bread. Now that it's soup season, Mike and I are looking forward to many more soupy Sunday lunches just like this one. 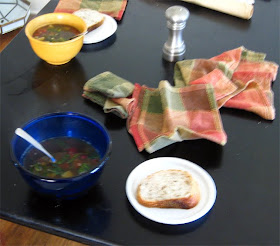 Unfortunately for those of you who read this blog for the beer, this Sunday lunch was a "beer-pairing fail." Luckily, the rest of the season should present many more tasty opportunities for pairing.
Fermentationette (Audrey) at 4:13 PM