Normally summer brewing isn't my thing, but brewing outside on a cool June day at my parents' house in Massachusetts is a completely different experience from brewing in my sweltering DC apartment. This year's batch makes it three summers in a row I have brewed a lambic on my summer vacation. I enjoyed the last two brewdays so much that this year I decided to extend it by making my first attempt at a traditional turbid mash schedule.

The basic idea of a turbid mash is to draw off some of the wort during the mash, holding it hot before adding it back to reach the mash out. This liquid (because it is drawn off early and held too hot for the enzymes to work) still has starches and other complex molecules that are usually broken down before the end of the mash. These molecules are part of the reason that a traditionally made lambic takes several years to ferment as wave after wave of microbes slowly tear apart the large molecules (creating sourness and complexity as byproducts of their effort).

I was surprised that the mash regimen, while labor intensive, did not take THAT much longer than the Wyeast (cereal) lambic mash I had used for my previous two batches of lambic (probably just over 2 hours from dough-in to sparge). What I did not expect was the big drop in efficiency I experienced. The previous batches each hit 90%+ owing to the hot sparge and long boil (which allows for extra runnings to be collected). While this mash had a similar sparge and boil the starches were not fully gelatinized. Despite the fact that turbid mash is that it calls for raw (ungelatinize) wheat, you do not boil or otherwise swell/burst the starch granules during the process (which would allows the enzymes access to the starch).

For my microbes this year I added a package of Wyeast Roeselare along with a cup of slurry from last year's batch (half of which was bottled with the rest racked onto raspberries and dark cherries). That batch has a great aroma, but is a bit lacking in sourness (most likely due to the high alcohol content).


While the turbid mash didn't take too much longer than a standard mash it did involve many more steps, rests, and twists (what did kill my entire day was the 5.5 hour boil I needed to reduce the 9 gallons of pre-boil wort down to 5). Hopefully the pictures along with each step will help to make it easier to follow than the (similar) text descriptions found in either Wild Brews, and The Cult of the Biohazard Lambic Brewers.

The 5 gallon mash tun, empty at the start of the day. 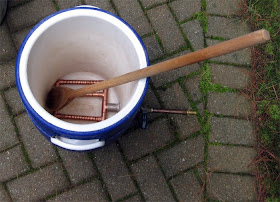 My big kettle started with the entire (milled) grist, 5.25 lbs of German pils and 2.75 lbs of raw hard winter wheat (a softer wheat would probably be ideal, but I couldn't find any raw). 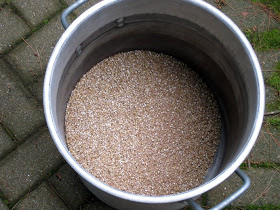 The small kettle got spring water, heated up to 144 F. The instructions I was following called for a total of 4 gallons of water for the mash, but I started with more to account for any evaporation or adjustments to the mash temperature (which came in handy). 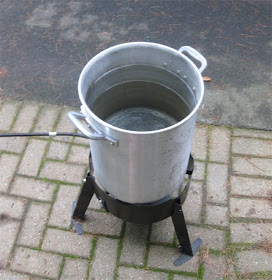 First 2.5 qrts of the 144 F water was mixed into the grain, to get the mash to 113 F. This is a very low water to grain ratio (.3 qrts/lb), so there was not much free liquor. Grain holds onto about .4 qrts/lb at the end of the mash, so really this step just gets the grain damp (basically no free liquid). I mixed the water and grain together in my big kettle before transferring it into the mash tun to ensure it was thoroughly wet (the manifold in my mash tun can get in the way). 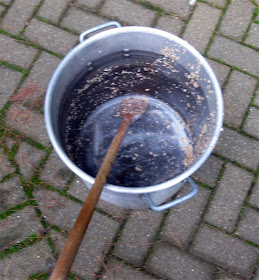 The water in the kettle was then heated to a boil and held there for the rest of the infusions. 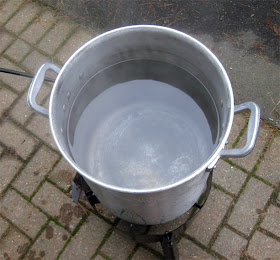 After letting the mash rest for 20 minutes I added 4 qrts of boiling water to it to get it up to 136 F. 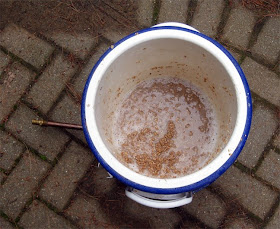 After 5 minutes I pulled 1 qrt of wort from the mash using the spigot (I did a brief vorlauf to remove any large chunks of grain). The 1 qrt of "turbid" wort was heated to 176 F in the big kettle to halt any enzymatic action. 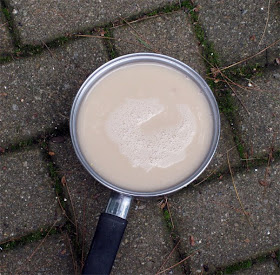 Right after pulling the 1 qrt of wort I added 6 qrts of the boiling liquid to get the mash up to 150 F. 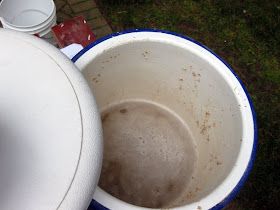 After 30 minutes I pulled 4 more quarts of wort from the mash (through the spigot again) and combined it with the wort I had pulled earlier in big kettle. I put the pot back on the heat to get it back up to 176 F. 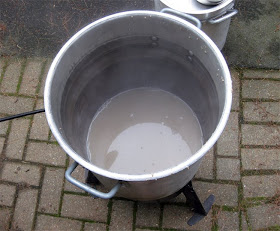 Right after pulling the second portion of turbid wort, I added another 5 qrts of boiling water to get the mash up to 162 F. 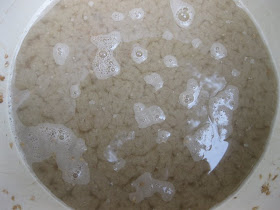 With the final infusion complete I topped the small kettle back up, and cranked the heat to get the water up to 185 F for the sparge. 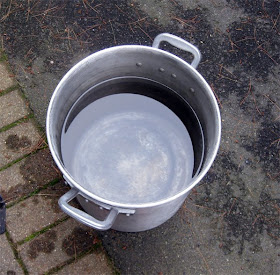 Finally I added all of the 176 F starchy wort from the big kettle to get the main mash up to 165 F (167 F was the target, but it took me more water than called for to hit my mash temps). This is hot enough that the enzymes should not work on the starches added back to the mash (preserving them for the fermentation). After about 10 minutes I then started the vorlauf (I used a piece of aluminum foil with holes poked in it to prevent the grain bed from being disturbed). 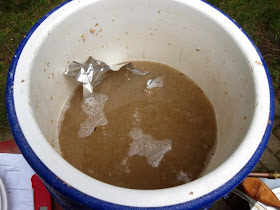 After 10 minutes recirculating the wort I started the sparge, draining from the mash tun into the big kettle, with the mash water staying hot on the turkey fryer. 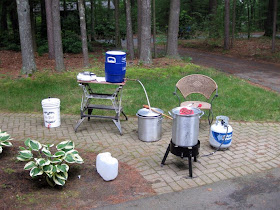 90 minutes later, with the sparge complete and ~9 gallons of 1.024 runnings collected I put the big kettle on the burner and put the spurs to it. It still took about an hour to get the wort to a boil due to the large volume and underpowered burner. 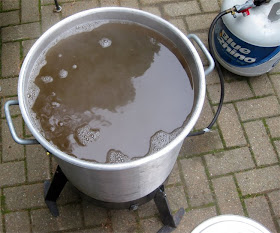 I had picked out some Hallertau Selects because they had such low AA% (1.5 when they were fresh), perfect for this brew since I have been too lazy to age any hops. 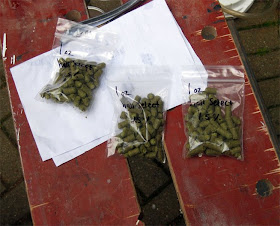 I added the hops just as the boil was starting. 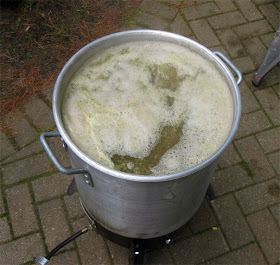 Even with the large volume of very hot sparge water my efficiency wasn't great and it took .5 lbs of light dry malt extract to get me up to my target OG of 1.048. Assuming the same efficiency (74%) 5.75 lbs of pils and 3 lbs of wheat would have gotten me there (along with 10% more water at each step of the mash). With the 5.5 hour boil completed, the wort chilled to 68 with my immersion chiller, and the hops strained out, I drained the wort into a 6 gallon Better Bottle. 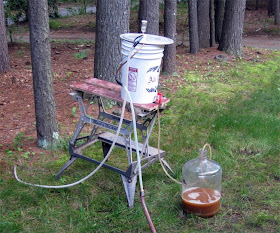 Once the transfer was complete I pitched a pack of Wyeast's Roeselare Blend along with a cup of slurry from last summer's lambic. Fermentation took off quickly, and after a few days added 1 oz of house toast Hungarian oak which I had boiled in water for 30 minutes to reduce the tannins.

I'll figure out if all the work was worth it when I try the beer next summer.

Collected ~9 gallons of 1.024 runnings. Super long boil because it just simmered for the first hour or two on my turkey fryer. Added 1.5% AA poly bag stored hops at the start of the boil. Added DME to compensate for lower than expected extraction near the end.

Chilled to around 68 then pitched most of a pack of Roeselare and about a cup of slurry from lambic 2.0. Fermentation took off quickly in my parent's storage closest which was in the mid-60s ambient. After a few days added 1 oz of house toast Hungarian oak which I had boiled in water for 30 minutes to mellow.

3/23/11 Ended up a bit more carbonated than I expected, but the flavors are great (funk, citrus, minerals). Sourness is a bit lacking, but still a great beer.

7/21/12 Bottled the grape portion... finally. 1.5 oz of table sugar and a bit of rehydrated Red Star Premier Cuvée. Sourness has come up a bit, but it is slightly vinegary. Still a bit cloudy, we shall see.

3/19/13 Finally a tasting of the Cabernet sauvignon aged portion. Nice mix of light fruit accented by lemons and funk. Similar to the plain version in that it is close, but not quite there. The flavors don't mesh in a way that works seamlessly.
The Mad Fermentationist (Mike) at 7:24 PM