After how well my first batch of Berliner Weiss came out, it was only a matter of time before I brewed another one. This time I upped the volume to a full 5 gallon batch because I polished off the first batch far too soon, but other than that I kept the wort production (decoction, mash hopping, minimal-boil) the same.

The only major change I made to the base beer was the yeast/bacteria. The first time I used the great Wyeast Berliner Weiss Blend, but it has not been re-released since. So this time I used some slurry from my buddy Dan (who does the City Brewer blog), he used Wyeast Lacto and some US-05. I also added some Brett L (also from Dan), and the dregs from a bottle of Cantillon for some complexity (the beer got to 1.002 pretty quickly so I doubt the added funk will do much). 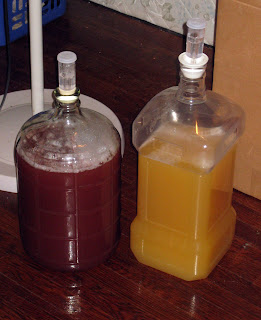 After making my own blueberry syrup last year (I liked the fruit flavor, but not the sweetness) I wanted to add some fruit to the beer during fermentation. I was inspired by a glass of Cabernet Sauvignon lambic that my friend Brian made (which incidentally took gold in the NHC East Regionals this year). So I took half the batch and added 34.5 oz of Cabernet grape juice after primary fermentation. Actual grapes would have been even better (that is how the lambic was made), but they aren't in season at the moment. The juice was from concentrate (picked up at the supermarket), but the flavor seems to be pretty good from the samples I have pulled (and the color in the glass is not nearly as shocking as the photo).

I am hoping to bottle soon since this will be the perfect beer for a DC summer that is just starting to burn.

Brought to a boil for ~3 minutes, skimming. Chilled to 80, pitched a thin 10 oz of slurry of lacto and yeast from Dan (US-05 and commercial Lacto). I also added some Brett L dregs from Dan. Put into my chest freezer @ 65 degrees.

Some fermentation evident around 18 hours.

5/26/09 Added the dregs of a bottle of Cantillon Vigneronne.

6/07/09 Took out of the fridge to encourage fermentation/funk to get moving.

6/16/09 Racked to secondary gravity down ~1.002. Half racked onto three 11.5 oz bottles of First Blush Cabernet Juice. Nice tartness. It took a couple days to see the see renewed fermentation from the juice. Left at summer DC room temp.

12/01/09 First tasting of both halves, both are doing well but need a few more months to mature.