It has been 9 months since I reviewed my Alderwood Smoked Porter, and since I was about to drink my last bottle of it I thought it was time for a final review. Not much I would change on the recipe, although I might try smoking my own malt next time. 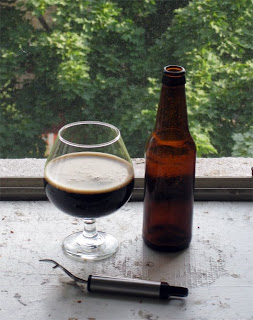 Appearance – Pitch brown, opaque from a distance, but clear when you look closely. Small tan head, very tight bubbles, retention isn't great, but some wisps remain. Retention is worse than 9 months ago, but the lacing has improved.

Smell – Big smoky aroma (campfire and sausages), with just a hint of oxidation. The oxidation is sherry like with a touch cardboard, acceptable but headed in the wrong direction. There are some notes of coffee and dark fruit, but they are in the background.

Taste – Good balanced smoke character that is potent, but not over the top (sort of like burned marshmallows). Surprisingly it tastes smokier than it did when it was young. There is some bitterness, but the beer is now more malt balanced than it once was. The porter character isn't as strong as I expected, the smoke and the age are more potent than the malt character. The fresh bready malt character is gone.

Mouthfeel – It has a nice creaminess, with moderate carbonation. Solid mouthfeel for a medium-high gravity porter.

Drinkability & Notes – Easy to drink, lots of complexity and no harshness. Pretty close to Alaskan Smoked Porter, but the smoke does not have the “varietal” alder character that the original has. I wonder how the malt smoking technique differed. A very solid beer, this is my last bottle, but at 15 months old it tastes like it is headed downhill anyway.
The Mad Fermentationist (Mike) at 6:01 PM