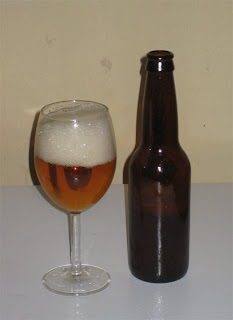 My Cable Car clone has been the batch that has generated some of the most interest on the homebrew boards (including a surprising number of ISO requests). I was even told that that there was a rumor going around that it was better than the original Lost Abbey beer (before anyone else had even gotten a taste).
I have yet to open my bottle of the original, so I haven't found out just how far off I am yet. Eventually I'll post my tasting notes on it, but for the moment I am pretty pleased that the three batches and year plus of aging resulted in a highly drinkable, fruity, peppery sour ale.
The first picture is of my initial pour, the second is after the carbonation had a chance to kick the yeast back into suspension.
Tasting 4/15/09
Appearance – Perfectly clear golden body with racing carbonation piercing through it. The head pours big and creamy, but fades to a thin covering in about 5 minutes. Certainly one of the more attractive sours I have made. The second pour is a bit cloudier, but no less appealing.

Smell – Big peach-apricot nose at first whiff. Once it has a few minutes to breath I get a bit of damp oak and some biscuity malt notes as well, but the big fruit stays. Not much funkiness in the nose.

Taste – Moderate lemon/citrus like tartness takes the lead. It is balanced by a touch of residual sweetness that is again reminiscent of ripe stone fruit. I wonder if the stone fruit character is from the lager portion (lager yeast produce a bit of sulfur which is associated with stone fruit). The finish has a bit of rustic peppery saison quality to it. The second yeastier pour covers up some of the sourness and makes it taste more like a slightly sour Fantome-esque saison.

Mouthfeel – The heavy carbonation is really great in this beer. The body feels pretty light, but it is not chalky or super thin like many lambics end up. 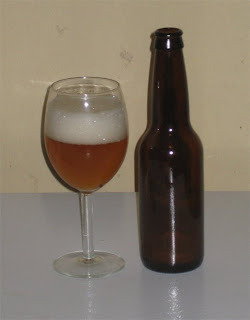 Drinkability & Notes – A really well balanced, drinkable sour beer. It isn't quite as sour as I would have liked, but I can forgive that. I'll be interested to see if it picks up some more funk/complexity with a bit more time in the bottle.

If I had this to brew again I would probably add some funk to the saison portion at least going into primary. I would probably also combine the Biere de Garde and pale lager portions to make this a two thread instead of the three thread recipe (I just think there was any advantage on this scale to brewing the two lagers separately).
The Mad Fermentationist (Mike) at 8:52 PM