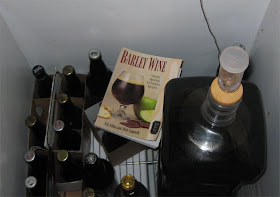 Published in 1998 Barley Wine: History, Brewing Technique, Recipes is one of the last in the Classic Beer Styles Series (#11 to be precise). It was written by Fal Allen and Dick Cantwell two pro-brewers from the Pacific Northwest. The book covers the general styles of American and English Barleywine with most of its advice based on the style as a broad term rather than as the specific BJCP styles.

Content: The first chapter is an interesting look at the history of strong ales loosely in the English tradition. The authors claim that parti-gyle brewing was the genesis of the style (although I find it hard to believe that ever brew day resulted in a portion of 10%+ alcohol beer, it seems like many brewers would have blended the runnings to make lots of moderate gravity beer). While these strong ales were made for centuries the the term barleywine didn't come along until Bass started using it in the early 20th century. English taxes on high gravity beers nearly eliminated the style by a few decades ago, but new English and especially American breweries took up the style again and made bigger/bolder/hoppier versions. The book is 10 years old, so its analysis of the American barleywine scene is a bit dated, but gives a good impression of how much the industry has changed even in the last decade.

The second chapter covers the various aspects of barleywine flavor. The overview of flavors is pretty generic without much discussion of the huge varieties of flavors that can be found in barleywines (particularly among the examples of English and American styles rather than between the two categories). This chapter also includes a brief overview of the different "families" of barleywines (The barleywines made on the East Coast being part way between the malty English and hoppy Pacific Northwestern). The authors add a short bit about big doppelbocks and their similarity to barleywines, but this is never mentioned again.

The third chapter covers the ingredients used in producing barleywines, but also wanders into the fermentation/aging process. For the malt bill the general message is to keep it simple with a high quality pale malt and just a couple specialty grains. There is a short section on sugars (mostly to say don't load the beer up with simple sugars), but they really don't give many specifics/details on the interesting sugar options available. For hops there are general instructions for American and English style beers, but not many specifics on which hops work best or in what combination.

For yeast strains there are general guidelines, but not specific examples of which yeasts are the best choices for a barleywine. There are some notes on pitching rates and aeration, but the way the information is presented makes it more useful to pro-brewers who know how many L/min they are running O2 or what cell count their yeast is. For aging instructions it suggests a long primary fermentation followed by a warm secondary fermentation before cold aging. At the end of the chapter there is a brief note on aging barleywine on oak (including the traditional place of wild microbes), but again the details are pretty lacking.

The forth chapters covers the brewing process. Most of the tips here could be applied to brewing any big beer. This chapter really doesn't provide any revelations because for the most part brewing a big beer is exactly the same as brewing any other beer. Sure you might opt for a longer boil, and you need to pitch more yeast, but these changes are pretty once you are aware of their necessity.

The fifth chapter covers commercial examples of barleywine. Like BLAM each beer has a short profile with OG/FG/IBUs, malts, hops, and some other details. Some recipes have loads of info (Brooklyn Monster) while some have hardly any (Anchor Old Foghorn). It was interesting to read through the specs for beers that I had had, but much of this information is available on the breweries' websites, and might not be up to date anymore anyway. The English beers are some of the more interesting to look at because many of them either don't make it over here (Fuller's Golden Pride) or are no longer produced regularly (Bass No. 1). The most interesting note is that they were told that Thomas Hardy's is fermented warm with a lager yeast (or at least was at the old brewery, not sure if it still is at the new brewery).

The sixth chapter contains the recipes. After the recipes there are a few appendices that cover things like festivals, troubleshooting, and a list of commercial barleywines. The troubleshooting is nice, but the other two sections are pretty badly outdated at this point (Beer Advocate and Rate Beer both have replaced these sorts of listings in books.)

Recipes: The recipes were written by a variable who's who of homebrew authors (Greg Noonan, Randy Mosher, George Fix, Charlie Papazian, and Ray Daniels) as well as some pro-brewers. This is nice for variety's sake, but it can be annoying because you can't make generalizations (for starters although not listed the efficiency seems to vary considerably between the recipes).

The recipes range from English to American in style, with some oddballs like Adambier, dark barleywine, and German barleywine. The recipes look pretty good for the most part with some interesting ideas, but some of the recipes have issues, like one that calls for peated malt as the base (20 lbs in 5 gallons). Having just used .5 lbs in 3.5 gallons I can say that much more than that wouldn't be too tasty to me. I would have liked to see more notes on how the beers turn out (flavor, color, peak age to drink etc...).

Accuracy: Overall there are very few cases of things being incorrect, but many cases of information simply missing detail. In general it just feels a bit outdated (for example I don't think they ever mention making a starter).

Readability: My main complaint is that for whatever reason the same topics are covered in multiple places. For example in the chapter on flavor the alcohol section talks about the Free Mash Act of 1880 (which started taxing beer based on OG), why isn't that in the history chapter? There is an especially large amount of overlap between the chapter on ingredients and the chapter on process, combining the theoretical with the practical would have made reading this book much easier.

The book reads more like something that was written for pro-brewers doing their first barleywine more than as something aimed at homebrewers. Dealing with all that extra malt/hops/yeast seems like a bigger problem on that larger scale than it does at home. The book also seems to assume a good deal of knowledge on the part of the brewer (like how to get 30 million cells per ml of wort) that I think might bare repeating for the homebrewer.

It is a pretty quick read, well written (very few typos or editing mistakes), but there is a lot of filler in there giving it a bland generality.

Overall: Not a bad read, but most of the information is available other places. If you have never brewed a barleywine before and Designing Great Beers doesn't have enough information on the style for you this might be worth picking up. I could also see this being a good buy if you are really interested in recreating commercial barleywines as there is quite a bit of info on that.
The Mad Fermentationist (Mike) at 7:30 PM