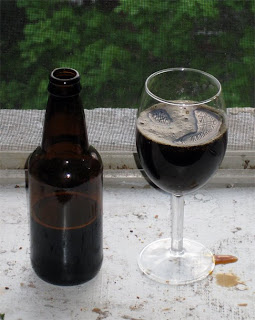 I had a request to review my Big Funky Ale, so even though it is a bit young (~10 months) for such a big funky ale I decided to do a review as a baseline for later tastings.

Appearance – Nearly opaque dark brown with just a thin ring of tan bubbles around the edge (and that was with an aggressive pour). When held up to the light there is a bit of amber at the edges, but this is one dark beer.

Smell – Big aroma of syrup drenched dark/dried fruit (plums, raisins, figs etc...). There is a bit of oak, some alcohol, and just a hint of fresh leather. Overall the aroma is like a combination of port and a slightly funky old ale.

Taste – The flavor is a rather sweet, dessert like, but not cloying. The sourness is mild, and there is not much bitterness, so it is not what you could call balanced in the way a beer traditionally is. The flavor is similar to the aroma, with layers of fruit, wood, and mild earthy funk. There is some alcohol presence, which helps to moderate the sweetness, but it is pretty well hidden beneath the layers of flavor. The finish is either toasty or oaky, I can't really tell.

Mouthfeel – Thick, coating, viscous body. There is still basically no carbonation, this one may need to be reyeasted despite the champagne yeast I added a few days before bottling. Many kinds of beer would be pretty unpalatable without carbonation, but I think something so big and complex isn't hurt that much.

Drinkability & Notes – This is the sort of beer that should be split between a few people after dinner. It is so rich that I may end up using many of the bottles for blending into sours that end up too dry/bland. What really amazes me is how aged this already tastes already despite having been brewed less than a year ago. Hopefully I get it carbonated eventually which will help to dry it out a bit and give it a bit more lively mouthfeel. I won't venture a guess at what I would change next time until I taste it with a bit more carbonation and age.
The Mad Fermentationist (Mike) at 6:26 PM