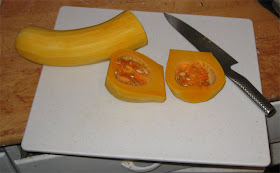 Sometimes you try a beer that really broadens your perception of what you can do with an ingredient. I am normally not much of a fan of the "standard" pumpkin ale formula (amber, heavily spiced, not much actual pumpkin flavor), but last year my friend Scott shared a bottle of Alpine's Ichabod with me. Ichabod is a pumpkin beer that is made as a different style each year, the 2007 version we had was wine barrel aged for several months with a dose of Brettanomyces.

A sour pumpkin beer may sound like a way out there idea, but for fall 2008 both Jolly Pumpkin (La Parcela) and Allagash (Drunken Promise) did sour/funky pumpkin ales as well. Sadly I have not had the pleasure of trying either of them. It is nice to see several breweries going off the beaten path on a style that normally has so little variation.

I couldn't get much information on Ichabod, so this recipe is not a clone. For the base beer I just came up with a recipe for a malty Belgian brown/red of my own design. The base malt was pils, with some Munich and melanoidin for bready maltiness. I added some wheat and flaked barley for body and head retention. The grist was rounded out with two types of crystal malt for residual sweetness and flavor, and a bit of carafa for color.

Pumpkin was out of season when I wanted to brew, so I decided to use butternut squash instead (butternut squash tastes better and is easier to work with than pumpkin anyway). I was amazed that my 3.75 lb squash 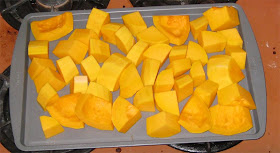 (after it was seeded, peeled, cubed, and roasted) yielded only about 1.5 lbs to add to the mash. 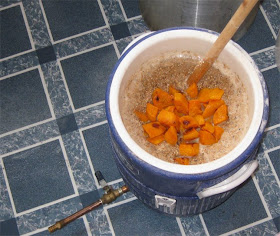 I may add some more to the secondary fermenter at some point if the beer doesn't have much squash flavor.

For spices I went with classic fall choices, nutmeg and cinnamon. I think nutmeg in particular pairs well with the flavor of squash. I wanted the spices in a supporting role (there is so much going on in this beer as it is), so I just added a couple grams of each. As always it is easier to add more spices later than deal with an over-spiced beer. 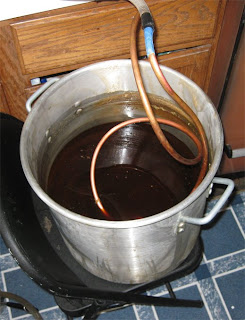 The beer was pitched onto the yeast cake from the Funky Flower, so it should get pretty sour. I added 1 oz of medium toast oak cubes which had been soaking in cognac since last summer. I also added a cup of wine to help simulate wine barrel aging. I am hoping that the squash, spices, oak, and bacteria/yeast combine to make a complex autumnal flavor. This one should be ready to bottle by late fall, but it is really up to the yeast/bacteria to decide.

Added the squash to the mash in chunks. Collected 7.5 gallons of 1.047 wort. Cinnamon was jarred, nutmeg was fresh grated.

Pitched onto the whole yeast/bacteria cake from the sour honey wheat beer that was brewed two weeks earlier.

3/21/09 Small pellicle starting to form. The sample I pulled tastes pretty good, some spice and wine/oak flavors evident, and maybe a hint of squash.

8/09/09 Added a bit of Primere Cuvee for eventual carbonation.

3/16/10 First tasting of the dry hopped version.  It is good, but I should have reviewed it earlier when the hops were fresher.

Didn't do too well in the 2010 NHC, judges wanted more spice/quash flavor and aroma.

5/6/10 First tasting of the plain version.  Very tasty, lots of sourness pretty complex.  I don't think it needs more spice/squash (both are just over threshold).

6/9/10  Last bottle of the dry hopped version.  Not what it once was, but still pretty tasty.  That hops have gotten a bit grassy, not too surprising after 4 months on them in the bottle.
The Mad Fermentationist (Mike) at 5:10 PM