Rye is a pretty interesting grain. It has much more character than the other grains we eat, having what some people describe as a slightly spicy flavor. These days though, most people don't see it outside of the occasional pastrami or corned beef on rye, but it has a varied history in both baking and brewing.

While rye may bring good flavor to your bread or beer it can cause some problems that other grains do not unless it it properly handled. When brewing a low temperature (~100 F) step is often added to the mash to help break down the sticky beta glucans (long chains of glucose) for improved wort flow during the sparge. When baking a sourdough starter is the most common leavening used because it lowers the pH (due to its lactic acid bacteria) making it so the amylase enzymes in the rye do not break down the gluten (which gives bread its structure).

Here is a variant of the easy no knead sourdough bread recipe I posted back in October tweaked to make a tasty rye bread.
Ingredients:
7.5 oz of bread flour
7.5 oz of whole rye flour
1.5 tsp of table salt
1.5 tbls of caraway seeds (more or less as desired)
11 oz filtered/bottled water (1.25 cups, plus a tablespoon)
2 tbls of sourdough starter

Technique:
(If using) Toast the caraway in a small pan over low heat until they begin to smell good (2-3 min). You can skip this step, but I think it really enhances the flavor of the finished bread.

Whisk together the flour, salt, and caraway. In a separate bowl dissolve the sourdough starter into the water. Then combine the dry with the wet, mixing for 20 seconds or until there is no dry flour visible. The dough may seem a bit stiff now, but as the starch molecules hydrate the dough will become softer. 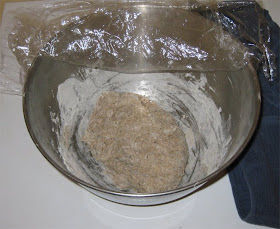 Set the dough aside in a bowl covered with plastic wrap and then a tea towel for 18-24 hours in a cool spot. You could add more sourdough starter and save a few hours here (as I do in my standard sourdough recipe) but with my starter I find a longer rest gets the flavor where I like it. As always you should adjust the times based on how quickly your starter works and how much sourdough flavor you like. 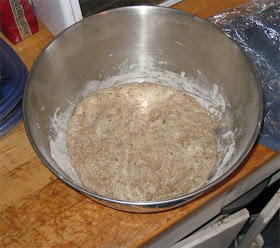 Flour a surface and turn out the shaggy mass onto it, adding more (wheat) flour on top. Fold the dough back onto itself a few times until it loosely resembles a ball. If the loaf is too sticky to work with (it should be tacky) or if it won't hold its shape you can fold in a few extra tablespoons of flour (this can be due to the protein content of your flour or the humidity). On a clean surface roll the dough ball between your hands for a few seconds to form a smooth outer surface. I used semolina on this loaf, but cornmeal or flour could be used to prevent the dough from sticking to the towel. 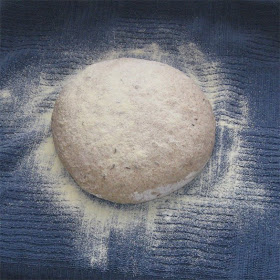 Cover and leave the loaf to rise until it doubles in size (1.5-3 hours). When it has almost doubled in size place a dutch oven in a cold oven and set it for 425 F. If you have an enamel coated dutch oven you might try setting the oven to 450-500 F since the lighter/glossy surface will transfer heat at a slower rate. Once the oven has preheated wait another 10 minutes for the dutch oven to heat through.

With a shaped loaf (unlike my standard sourdough recipe) you need to slash the top to allow for oven spring and for steam to escape. I like a few parallel cuts with a sharp knife held at a 45 degree angle (1/8 inch or shallower). Place the loaf (as gently as possible) into the dutch oven. 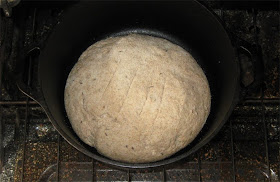 Bake 25 minutes with the lid on, then raise the temperature to 450 and remove the lid, bake until the crust is golden brown and crunchy (20-25 min). 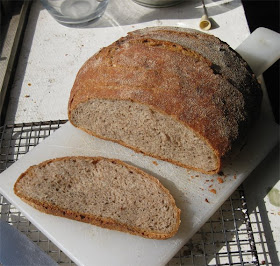 This rye bread is great for sandwiches, I particularly like it with corned beef, mustard, and young sauerkraut (cabbage sprinkled with ~.5 tsp/cup of kosher salt and left to wilt for 6-12 hours, you can rinse/dry it before using if too salty for your taste).
The Mad Fermentationist (Mike) at 9:35 PM