The plan has now been executed. On Saturday Scott and I took a drive out to Middleburg Virginia to pick up our beautiful red wine barrel from Chrysalis Vineyards. The winemaker had rinsed the barrel out with hot water on Friday night and ozonated it to keep the microbes at bay (not that we really care if a bit of wild yeast is living in there).

The barrel was coopered by Saury Tonnellerie in Rutherford CA (to me it looks like the Bordeaux Chateau Ferre which is made of French oak). Other than that though we don't know much about it, the winemaker wasn't sure what sort of wine was in the barrel last, or exactly how old it is.

The aroma of the empty barrel was fantastic, deep red wine and fresh grapes (very clean), hopefully some of that aroma is endowed onto the beer. We were surprised that the barrel could fit snugly behind the rear seats in Scott's SUV. 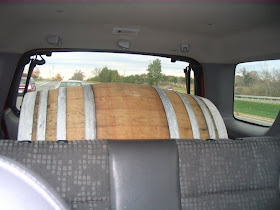 My friend Tim had donated a homemade barrel rack (constructed from a wooden pallet). We got the rack into position in the Nathan's basement and the barrel onto the rack. Once the barrel is filled it weighs about 600 lbs, so it won't be going anywhere until we take the beer out. 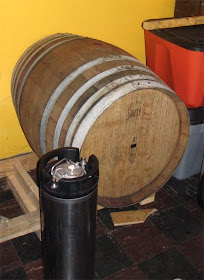 Sunday afternoon everyone brought their contributions over to Nathan's. All told, six people contributed a total of 45 gallons of attenuated beer, two people gave five gallons each of sour beer, and 1 person gave 5 gallons of fresh wort. We racked all but five gallons of the sour beer into the barrel to leave some head space. The combined gravity of the 55 gallon blend was around 1.028, so there is some serious fermentation still to be done. Lucky the transfer was drama free, no leaks, and no spills. 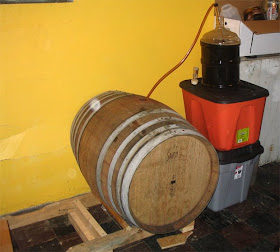 The blowoff tube (stuck into a #10.5 stopper) was bubbling within 10 minutes of getting the last of the beer into the barrel. I'll be brewing 5 gallons of top-off beer soon as we will probably loose that much over the next year to evaporation.

We are hoping the beer will be ready to bottle in about a year, but it may take longer depending on how quickly the bacteria gets to work. Once this beer tastes ready we will all brew a new beer to fill the barrel back up again (hopefully on the same day we get together to bottle the 24 cases of Flanders Red). I like the idea of doing a big sour beer, hopefully my first attempt at the "style" will be ready to try by then.

Discussion has already started about getting a second barrel (the rack has room for two). We have a couple leads on a bourbon barrel, so we will probably make something big, dark, and clean (Imperial Porter or Stout probably).

This one was bottled a bit less than a year later.
The Mad Fermentationist (Mike) at 7:48 PM