Last week I decided to bottle my one year old Flanders Pale Ale (which had been blended 4:1 with my two year old Lambic a month earlier). Like most of my sour beers I decided to bottle half plain and add fruit to the other half. I mulled over several possible options (cherries, blackberries, apples), but in the end decided to go with Pluots (an apricot-plum hybrid). I know a couple homebrewers who have beers fermenting with them, but the only professional brewery playing with them to my knowledge is Russian River in Compunction. 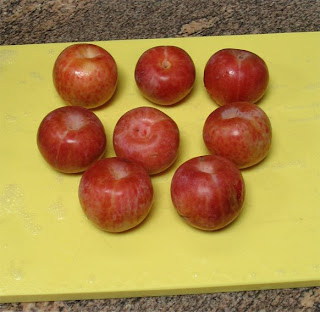 This particular hybrid has pretty pale flesh compared to some others, which suggests to me that it probably has more apricot in it (which will lead to a more acidic finished beer according to Vinnie at Russian River). To get the fruits into the carboy I had to cut them up, so I opted not to freeze them first. I took two pounds of the racquetball sized fruit, and gave them a quick dip in Star-San to make sure there was no bacteria on the skins (the freezing normally makes me comfortable enough to skip this step with smaller fruit). I then quartered them (after giving both the knife and cutting board a dip in sanitizer) and levered out the small pit.

I then put the fruit into a carboy and racked the remaining ~2.3 gallons of beer onto it. I would have preferred a smaller carboy, but I didn't have one on hand and the renewed fermentation should drive out most of the oxygen. 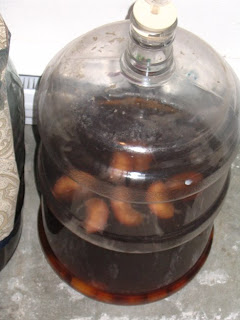 After a few days all of the fruit had floated to the surface and was looking bloated. The beer will sit on the fruit until next summer (on a suggestion from Vinnie, what a generous guy with his knowledge). I'll have a tasting of the fruitless portion in the next few months, really looking forward to it.
The Mad Fermentationist (Mike) at 8:46 PM