It's been three months since my last review of this one, not long by my standards, but I just got a request and in the last month I have gotten to try two of the only American versions of the style out there, Ich Bin Ein Berliner Weisse from Nodding Head and Berliner Kendall from Cambridge Brewing. The Nodding Head version was pretty nice, not too complex, but solid sourness and very easy drinkability. The Cambridge version was pretty lackluster, it barely qualifies as tart, and didn't have much else going on for it.

Just going with the "straight up" this time. 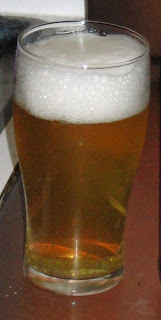 Appearance – Lite-lager pale-yellow, but not quite as crystal clear as a macro-beer (particularly after the yeasty second pour). It pours with a two finger, tight, white head that quickly sinks to ½ finger, but stays there till the bottom of the glass.

Smell – Apparent sourness, but it doesn't have that big sour nose that most of my other sour beers have. Sweet cereal wheat, it still smells very fresh despite being more than 7 months old. Starting to get a slight tinge of Brett in the aroma, light spice and cherries/apples.

Taste – Great sourness, without being too heavy. Solid wheat background, that isn't quite as strong as in the aroma. The Brett is starting to have an impact on the flavor as well, sort of like a lambic light with lots of interesting fruit flavors. There aren't the layers of complexities that bigger sour beers have, but for 3.5% ABV there aren't too many beers more complex than this.

Drinkability & Notes – Luckily that pesky “grainy” aftertaste is now completely gone, which really makes it easy to drink on a warm August night. I think this is a better beer than just about any commercial Berliner Weisse I have had, and one of my better batches to date. It will be interesting to see how the Brett character continues to develop (not that my last two bottles will last that long).

If anyone from Wyeast is reading this, please bring this blend back!
The Mad Fermentationist (Mike) at 9:34 PM