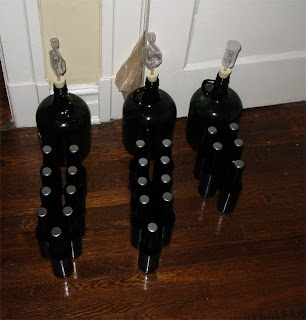 Here is the most recent batch I bottled, a massive malty liquor infused barleywine. This is actually the strongest beer I have bottled to date at over 12.5% ABV, it probably needs at least 6 months in the bottle to mellow out before I drink more than a bottle to check the carbonation (which is fine because a 95 degree day does not scream barleywine to me).

The batch was inspired by, but not a clone of, Lost Abbey's Angel's Share. For once I actually had a bottle of the beer to be inspired by as I got a bottle for being part of the Sinners Club. The beer is basically an imperial brown ale aged in bourbon or brandy barrels. It amazingly delicious and complex with a dry enough finish and enough hidden alcohol to make it dangerous.

Many people might look at my recipe with 2 lbs of crystal and .2 lbs of honey malt in just 3.4 gallons and say that it will leave too much residual sweetness. However, between the 3 hour mash at 150, .5 lbs unrefined sugar, and highly attenuative US-05 yeast it got down to 1.020 (very close to the 1.018 I measured for Angel's Share).

The only major snag I encountered on this batch was the same as my most recent Flanders Red, the beer simply did not start fermenting. I still blame the Campden Tablet water treatment, but in the end the beer tastes fine and all it cost me was a few pints of beer because I was forced to rack the beer an extra time.

After primary fermentation ended I divided the batch into three jugs for secondary. To the first jug I added .5 oz of heavy toast American oak that had been soaking in Bourbon along with 3 tbls of Makers Mark to heighten the Bourbon flavor. To the second I added .5 oz of Hungarian oak that had soaked in Cognac along with 3 tbls of Courvoisier VS. The third jug was left plain so I will be able to see exactly how the oak/liquor versions compare to the base beer.

Adding liquor is something that as homebrewers we can do easily, technically though it is illegal for professional breweries to do. Aging their beers in old liquor barrels that still have some of the liquor soaked into the wood is a way for them to sidestep this law. Recently though it seems as if this loophole may be closing, California is considering upping the tax rate for any beer that gains more than .5% ABV from the residual liquor in a barrel.

Look for a full tasting of this batch sometime in early 2009.

Crushed the grains the night before. Added 1/4 (crushed/dissolved) campden tablet to unfiltered DC tap water in the morning. Mashed in during my lunch break, and did not sparged until after work (thus the long mash time).

Sugar was a half cake of Goya Pilloncillo added to the kettle at the start of the sparge to dissolve. Collected 6 gallons of 1.070 wort (including the sugar) pre-boil.

Ended up a bit higher OG than I planned, but I'll leave it as is. The longer mash seemed to boost efficiency a bit for such a big beer.

Chilled to 70, then placed in the freezer at 62 F. Gave it a 60 seconds of pure O2, then pitched a pint of 2 week old slurry from the IPA which had received fresh wort.

After 24 hours there was no activity so I boosted the temp to 65 and gave it a quick shake.

5/01/08 Still no activity, fearing the worst I racked to secondary and added a rehydrated pack of US-05.

5/22/08 Racked to three 4L jugs after 3 weeks in primary. Two full, one with .5 oz brandy soaked Hungarian cubes and and one with .5 oz bourbon soaked American cubes. One half full with nothing added.

6/21/08 Added another tbls of liquor to each, both taste pretty good. The flavor is still a bit rough, but getting there.

7/04/08 Airlocks had gotten pretty low, might have gotten a hint of oxidation, but the flavor is still continuing to mellow and improve.

7/28/08 Bottled with 10 g of cane sugar per gallon plus some rehydrated S-04. Got 9 bottles of each of the Bourbon and Cognac jugs, and 5 bottles of the plain. Plus 2 blended bottles to test carbonation in a few weeks. Aiming for 2.2 volumes of CO2. I am not sure if the S-04 will have the alcohol tolerance to do the job, but I can always reyeast if needed. There is no hurry as July in DC is not the right weather for a 12.5% Barleywine.

12/26/08 Added some dried champagne yeast to aid in carbonation.

5/05/09 Still basically no carbonation. Blended a bottle each of the bourbon and the brandy with equal parts of the Funky Old Ale, entering the blend in the SoFB as an Old Ale.

1/17/10 Got around to doing a tasting with forced carbonation.  Pretty tasty, with the Brandy and Plain being more drinkable and complex than the Bourbon spiked version.
The Mad Fermentationist (Mike) at 9:58 PM