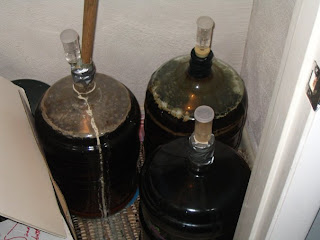 took a trip up to see my parents in Massachusetts. The three sour beers I have up there were still looking good. The last pictures they sent me made we worried that there was some mold growing (more than just in the airlock), but on close inspection it was just dried beer in some places and souring microbes in others.

The Cable Car clone still needs more time, it is just starting to get funky, without any sourness to speak of. I added some French oak cubes that had soaked in the same Lost Abbey Red Poppy starter that I used on my Flanders Red and Big Funky. I may feed it a few ounces of malt extract the next time I am up to give the bugs something else to eat.

The Flanders Pale has a terrific funky nose, but only a soft tartness. The oak leg looked pretty beaten up so I decided to replace it with a standard stopper and airlock. It is very dry so it will be time to bottle half of it the next time I am up there. I also have 2 lbs of plumcots (Dapple Dandy pluots) that I pitted, quartered, vacupacked, and froze that I will add to the other half of the batch.

My Lambic finally tasted nicely sour, but it had gotten enough sharp acetic acid (probably from the airlock going dry) that I decided to blend one gallon of the Flanders Pale into it and visa versa. To accomplish this I transferred two gallons of each beer into a bottling bucket, then transferred two gallons of the blend back into each carboy. I bottled half of the blended lambic with 3/4 cup of light DME, I considered adding fresh yeast but decided the relatively fresh 1 year old Flanders Pale Ale would provide enough viable microbes to get the job done eventually (I am in no hurry on this one). 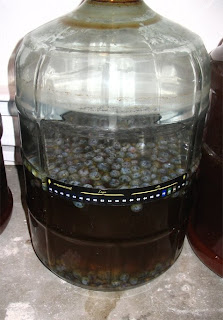 After bottling half of the now blended lambic I transferred the remainder of the batch onto 4.4 lbs of local blueberries. The berries were frozen for about 8 hours to break up the cell walls before they were added to the beer. I plan on bottling this portion in another month, but it will depend on the flavor and attenuation. The base beer is at 1.002, so if it is much higher than that in a month I may transfer the beer to tertiary and leave it there until it dries out.

Originally I planned to split this batch of lambic five ways leaving one gallon plain and adding four different fruits to one gallon each, but in the end I decided it would waste (during transferring, bottling etc...) less of this precious elixir just to do half with a fruit and half without. I liked the idea of blueberries because they are native to America, have a distinct flavor that I love, and have only very rarely been used to make lambic (Cantillon Blåbær Lambik and Upland Blueberry Lambic are the only two commercial ones as far as I know).

In the case of the Cantillon Blåbær Lambik it seems that they may not have used what we refer to as blueberries here in America. According to Wiki “The names of blue berries in languages other than English often translate as "blueberry", e.g. Scots Blaeberry and Norwegian Blåbær, although those berries may belong to another species. For example, Blåbær and French myrtilles usually refer to the European native bilberry, while bleuets refers to the North American blueberry.”

I'd like to encourage people to branch out and try something in their fruit beers besides the two old standbys, cherries and raspberries. These days there are so many options, particularly in the summer when terrific fresh fruit is available at local farmer's markets for so much less than those Oregon Purees. 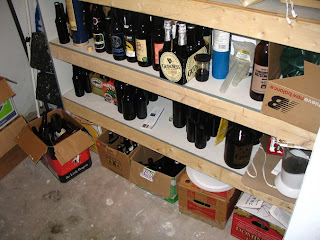 You can see how kind my parents are, allowing me to stack up beer in their spare closet. The cases down the bottom are of the various sour beers I have made, if I didn't have somewhere to keep them I would drink through them far too quickly. I also have some high alcohol homebrews that have not made it to their peak yet. In addition I am keeping some commercial beer that need a bit more age, nothing too amazing at the moment, but certainly some tasty stuff including a 2006 Stone RIS, 2006 Dragonslayer, 2007 Mikkeller Black Hole, 2007 Jolly Pumpkin Noel, Cuvee de Ranke, Fuller's Vintage 1998, and Abbaye De Saint Bon-Chien 2006.
The Mad Fermentationist (Mike) at 8:03 PM