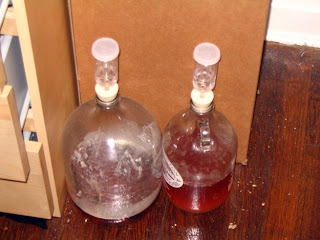 Wyeast has released their excellent Roeselare blend as part of their spring (April-June) VSS lineup. I'm excited because I have already started hoarding bottles of my first batch of Flanders Red that I brewed 18 months ago.

My only major complaint about the first batch was that it never got sour enough. To remedy that issue this time around I am going to pitch a starter made from the blend into primary instead of adding clean yeast in primary and waiting until secondary to add the blend. Bacteria grow faster than yeast so the only risk with adding a slurry of them early is that they will make acid so fast that it will hinder the brewer's yeast from completing its alcoholic fermentation.

While pitching the blend earlier should increase the lactic acid content of the finished beer, I'll still need to get some acetic acid if I want that authentic flavor profile. Instead of playing around with an even more oxygen permeable vessel than a better bottle, which would risk overshooting and getting too much acetic acid, I am going to try blending. I am planning to do a 5.25 gallon batch, after primary I will take 1 qrt of the wort and put it into a growler with aluminum foil over the mouth. After a year this malt vinegar will be blended with the main batch to taste. Acetobacter needs lots of oxygen to convert ethanol to acetic acid, as a result once the beer in blended and bottled there should be no risk of the vinegar flavor getting out of control.

Over on the BBB Baums posted his calculation that you can multiply the numbers given for vessels in terms of cc/L year of oxygen by 2.8 to get the maximum ppm of acetic acid that can be produced per year (assuming 100% of the oxygen is used to make acetic acid). Wild Brews says Flanders Reds range from 1,500-2,500 ppm acetic acid, and have a flavor threshold of the molecule is around 300 ppm. With the 0.86 cc/L number Raj Apte gives for Rodenbach's giant foudors, it would take something like 1,000 years of aging to get Rodenbach to those levels. Since we know they age for a much shorter time than that, we can extrapolate that their containers must be much more oxygen permeable than the math suggests.

According to these numbers you'd need to age in a vessel that lets ~238 cc/L of oxygen a year (a 5 gallon bucket lets in ~220) for 3 years to get up to 2,000 ppm. I'm not sure if these numbers are spot on, but between them and my experience I believe that .86 just can't be right. My theory is that the lids of those big tuns are much more permeable than the sides. A new barrel has to by hydrated before it will hold a liquid without leaking, those big tuns are made in such a way that the beer does not touch the lid, so it is not hydrated, which means it is probably extremely permeable.

After all that I'm not a big fan of acetic acid, so I'll probably try to get it just over the flavor threshold. I have talked a couple of my friends into brewing their own, each using their own recipe and methods. After 12-18 months we'll all get together for a blending session. Whatever is left over after making the "perfect" blend will have fruit added to it.

In the photo on the left is my Roeselare blend starter, on the left is a culture from the dregs of Red Poppy from The Lost Abbey. I am going with a very similar recipe to the one I used last time, just a few tweaks to get it a bit darker:

Used 1/2 a campden tablet to dechlorinate the water before brewing.

Collected 7 gallons of 1.055 wort. Chilled to 70, gave it 60 seconds of pure oxygen, and placed it into a 65 degree freezer. I then pitched a partially decanted ~2 qrt starter of Roeselare Blend that was a couple weeks old. I am planning on adding a culture of the dregs from Red Poppy to the secondary to increase the number of microbes in there.

Overshot my expected gravity (1.062) and undershot my planned volume (5.25 gallons) a bit, but I am planning to top off with some deoxygenated water when it goes into secondary. I am also planning on pulling off 1.5 quarts to leave uncovered to make some strongly acetic beer to blend with the batch.

Still no activity after 36 hours, so I upped the temp to 68.

After another 12 still nothing, so I added some of the Red Poppy starter.

5/15/08 Still nothing, and no change in the gravity so I pitched a rehydrated pack of US-05 and some more of the Red Poppy starter.

6/16/08 Added 2 siphons full of Big Funky, right after it started fermentation, hoping to feed the bugs a bit since the gravity was on the low side.

8/20/08 Some sourness has been created, but the pedio is making it buttery at the moment. Still needs plenty more time, but it is progressing.

10/02/08 Update, down to 1.009.  It is starting to develop some nice sourness and a cranberry fruitiness, and the buttery flavor that I got last time I took a sample is gone. This is shaping up to be a good one if it doesn't dry out too much.

11/09/08 Racked into a 60 gallon red wine barrel from Crysalis Vineyards.  Mixed with 50 other gallons, from a similar recipe.